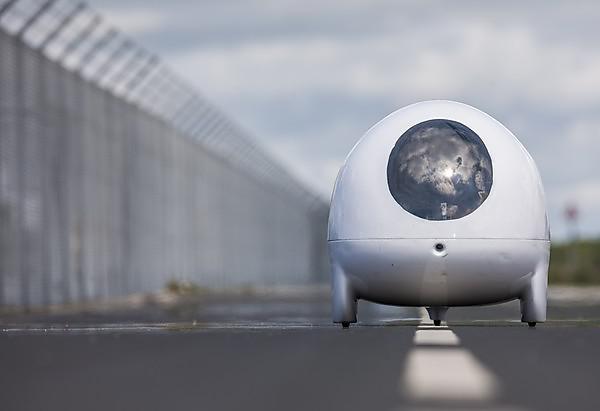 Former London Marathon winner Sarah Piercy is continuing her physical and mental preparations after teaming up with University of Plymouth for a world record attempt.

The 2000 women’s wheelchair champion has so far spent almost six months preparing for the World Human Powered Speed Challenge (WHPSC) in Battle Mountain, Nevada, where she will be aiming to break the current women’s handcycle record of 24.76mph.

Recent tests with engineers from the University on the tarmac at RAF St Mawgan in Cornwall have already seen her achieve in excess of 20mph.

But Sarah has also been working closely with students and lecturers from the Faculty of Health and Human Sciences – including physiotherapists, nutritionists and sports psychologists – to ensure she is in the best possible shape for the record attempt.

Sarah, who lives near Exeter, has a condition called arthrogryposis multiplex congenita, which can lead to a contracting of the joints. But it has not stopped her completing ten London Marathons and enjoying success in a number of other races across the UK. She said:

“The support I have received so far has been amazing, but I do need it because this is the biggest challenge I have ever taken on. My training has been going really well and the results we have achieved in testing have made me even more hopeful about breaking the record. I am fully focussed on getting all my preparations perfect and now we just have to hope that conditions are right for the trials.”

This is the second year that University of Plymouth has travelled to the United States to take part in the WHPSC competition, which includes a run-up of up to five miles on a straight, flat, high altitude road before a timed section of 200 metres.

It had originally been planned to take two athletes, however former Army Air Corps trooper and Help for Heroes ambassador Chris Jones has had to withdraw for family reasons. So the team are now concentrating their efforts on the female record.

“Sarah’s testing so far has been very encouraging and the time and effort she has put into the project has been outstanding. Every time she gets into the bike she goes quicker, so we are quietly confident about the prospects for September. We know from previous experience that we have a fantastic and fast handcycle, so we are now focussing all our efforts on the final few weeks of preparation.”

There is also a Crowdfunder appeal currently running, which has so far raised more than £1,000 towards the cost of the record attempt, and more information about that can be found at http://www.crowdfunder.co.uk/project-nevada-world-hand-cycling-speed-record.