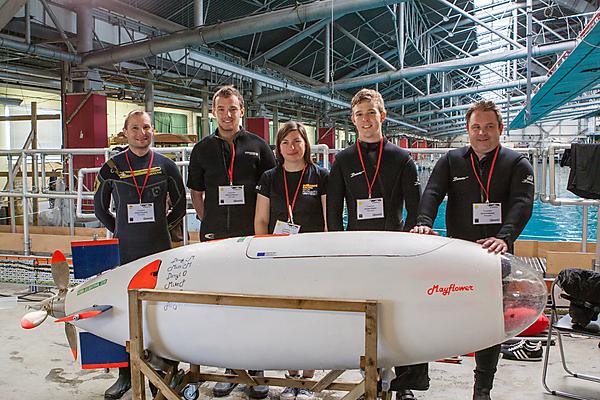 Four mechanical engineering students from University of Plymouth have pedalled their way to third place in an international submarine race – and broken the UK record in the process.

After five days of racing, the University of Plymouth leg-powered submarine engineering team (PULSE) powered to a speed of 4.4 knots to place third overall in the competition against teams from Canada, Germany, New Zealand, The Netherlands, the UK and USA.

"We are delighted with the result. Although we designed the submarine as a part of our dissertations, its realisation has only been made possible by the combined support from local businesses, Dr Keri Collins (Project Manager) and many other university staff. It's been hard work however the skills gained and friends made along the way make it all worthwhile, and we're all extremely proud of what we've achieved."

The teams are challenged to race their human-powered crafts against the clock around a demanding slalom course and are judged on overall speed, the week’s top speed, agility, innovation and on the best presentation. This year has seen almost 100 students from ten universities from around the world team up to pedal furiously in SCUBA gear in flooded, submerged submarines around the huge tank, the size of an international football pitch.

“We decided to keep the design as simple as possible in our first year as the competition is a real challenge. Owing to this approach, we never had to abort a run and won the prize for reliability. We were also a close second in the agility competition. This success would not have been possible without the collaboration of local businesses such as Babcock and Teignbridge Propellers, and especially GMD Eurotool Ltd who went out of their way to supply parts of the drive train. Along with support from local businesses, the PULSE team was helped financially by a Proof of Concept grant, through Research & Innovation, a donation from the Plymouth Fund and by the School of Engineering, Computing and Mathematics.”

Adam Kyte, Lecturer from the School of Engineering, Computing and Mathematics, said:

“This is the first time University of Plymouth has been represented in this competition so this is a fantastic achievement for the team. Despite working long hours to get the vessel ready, the first test for PULSE’s sub was in the water at Gosport so it is a real testament to their hard work and effort.”