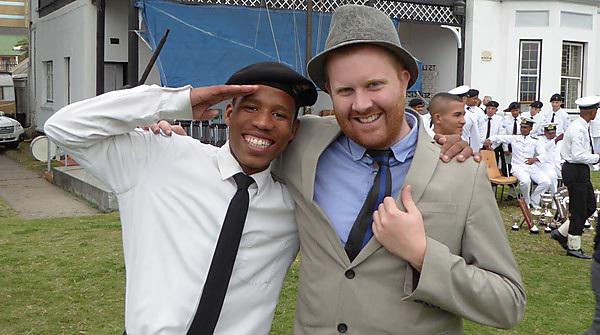 A Plymouth University graduate who has devoted the past eight years to helping vulnerable and traumatised children in South Africa has been nominated for a national honour.

Harrison Nash, who graduated from the BSc (Hons) Social Work course in 2011, will receive a British Citizen Award (BCA) at a ceremony later this month.

Launched in January 2015 to recognise exceptional individuals who work tirelessly and selflessly to make a positive impact on society, the BCAs are awarded twice annually, and recognise ‘everyday’ people whose achievements may otherwise be overlooked.

Now 27, his work in South Africa began when he was 18. After finishing his A levels at Devonport High School for Boys, he spent four months in Port Elizabeth teaching at two schools, one of which – the Protea Primary School – was for traumatised children with behavioural problems.

He also became attached to a youth project, the Siyakatala Child & Youth Care Centre, which caters for children and young people aged five to 20, assisting in various activities, helping with their school work and organising birthday parties.

The experience left its mark and after several more visits to South Africa, and the start of his degree at Plymouth University, Harrison launched Maranatha Care Children in 2009.

The charity aims to help South African children by offering development in education and life skills, providing suitable home environments and safeguarding the futures of those in care.

He also used his course to help in the country and, for his community development project, he worked with a newly formed self-harm support charity (SIESTA), carrying out research to help the charity establish itself, successfully applying for funding and organising a self-harm awareness workshop.

He now lives in South Africa full-time, where he works as a programme manager for the Maranatha Streetworks Trust, continuing his efforts to help traumatised and vulnerable children in a variety of ways.

“From my first experience, I realised that I wanted to make a bigger difference than just one visit and it is what I began to focus on. Even just a small amount of funds can go a very long way compared to the UK, and the charity is doing extremely well and we have raised approximately £50,000. It is so rewarding being based in South Africa and to be working with such resilient and inspiring young people on a daily basis.

Harrison is one of 33 recipients who will be honoured at a ceremony on January 28 at the Palace of Westminster, and each will be presented with a Medal of Honour, inscribed with the words ‘For the Good of the Country’.

For more information about his charity, visit the Maranatha Care Children website.

If you would like to find out what other relevant alumni are currently doing, please visit the health and social work interest area.

From optometry to podiatry, find out what courses we can offer you

We cover a wide range of health and care related professions