A battle between the sexes may be behind a dramatic shift in diving beetle populations over the past three decades, a new study shows.

Female choosiness has led to the evolution of rough body surfaces in some species which make it harder for males to hold on to them during mating. In a few cases, ‘rough’ and ‘smooth’ females are found within the same species, sometimes having different geographical ranges.

Now research led by Plymouth University has examined such a situation in a common European diving beetle, Hydroporus memnonius, and found that populations with ‘rough’ or ‘smooth’ females also have different males.

In ‘rough’ populations, males have enhanced suckers on their front and middle feet, representing a male counter response in the sexual arms race which, it was predicted, would enable the 'rough' female form and its associated male to spread at the expense of the ‘smooth’ form, replacing it in areas where the two meet.

In the UK, ‘rough’ and ‘smooth’ Hydroporus memnonius meet close to the Scottish border, in a contact zone first identified around 30 years ago. By comparing data collected in the 1970s and 1980s with a recent survey, scientists showed this change is indeed occurring.

The study, published in PeerJ, also shows that this shift, unlike many other recent changes in the distribution of plants and animals, is unlikely to be down to climate change, and instead seems to be the first example of a change in distribution resulting from the battle of the sexes.

“Rough and smooth females have been known in some species of diving beetles for at least a couple of centuries. The roughened surface of some females was mentioned by Charles Darwin in one of his classic works, where he cited it as an example of co-operation, seeing it as a way in which females made it easier for males to hang onto them underwater. We’ve known for a while that the opposite is actually true, and the rough surface is a way in which females make things harder for males and so exert greater control over mating.

“In this Hydroporus, the male counter response to female roughness should make it easier for such males to hold on to any surface. In such a situation these males should expand their range, regardless of female form, as they’d be at an advantage across the board. Given that smooth females are less able to resist potentially costly matings, we’d also expect rough females to increase in number. This is exactly what we see where the two sets of populations meet in the UK, and in the end, the process may lead to the disappearance of smooth form altogether.”

Hydroporus memnonius is found across continental Europe – from the Balkans and Italy in the south to Scandinavia in the north – and is widespread throughout the British Isles. But locations where ‘rough’ and ‘smooth’ females co-exist are relatively rare, with the best recorded contact zone being in the Scottish Borders and Cumbria.

During 2007-08, samples were obtained from 27 populations in northern England and southern Scotland, spanning the transition zone between the two forms. A highly significant change has occurred over this time period, ‘rough’ females and their associated males expanding north and west by approximately 40-50 km in around 30 years.

“On the basis of both thermal tolerance data and the wider global distribution of these morphs we argue that the observed range shift is highly unlikely to have resulted in response to climate warming, but is instead consistent with predictions based on the dynamics of sexually antagonistic coevolution in this beetle.”

The full paper – Observed shifts in the contact zone between two forms of the diving beetle Hydroporus memnonius are consistent with predictions from sexual conflict by Bilton and Foster – is published in the PeerJ journal, doi.org/10.7717/peerj.2089. 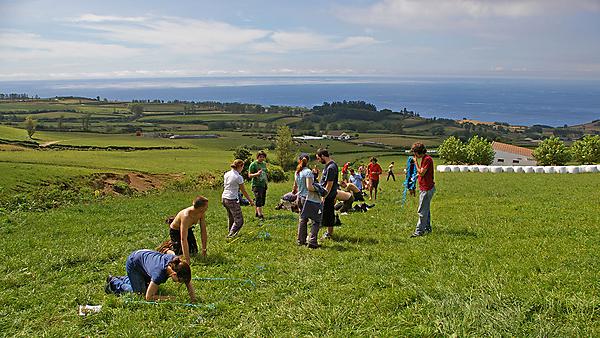 The Marine Biology and Ecology Research Centre addresses a broad range of research questions, from the effects of environmental stress on microbes and developing embryos to the management of large scale impacts, such as global climate change. Its research is divided into six broad research themes:

Find out more about the Marine Biology and Ecology Research Centre