Autonomous vehicles are often spoken about as being a crucial element in the future of transport.

But a team from the University of Plymouth is exploring ways to harness advanced technologies to create boats which could transform the future of ocean science.

Academics and students in the University’s School of Engineering, Computing and Mathematics are currently developing a series of vessels that could be put to sea conducting a range of scientific studies and surveys.

Using wind as the primary propulsion and various sensors for navigation, guidance and control, these boats could potentially carry out long-duration missions lasting days or even months in a fully autonomous manner.

The Plymouth research team is led by Dr Jian Wan, Lecturer in Control Systems Engineering, and includes a postdoctoral researcher as well as PhD, Masters and undergraduate students.

They will be pitching their efforts against the world’s best during the 11th World Robotic Sailing Championship, taking place at the University of Southampton from August 26–30.

“Autonomous sailboats can be used as an economic and efficient platform for oceanography, mapping, survey, reconnaissance and many other marine activities. They can work individually or collectively on such tasks with full autonomy and can play an important role in the future of maritime science. As Britain’s Ocean City and the final departure place for the Mayflower voyage, it seems logical that Plymouth should be part of research into developing such technologies and their applications.”

To advance his research, Dr Wan has received funding and sponsorship from the School of Engineering, Computing and Mathematics, the Engineering and Physical Sciences Research Council (EPSRC), the Royal Academy of Engineering and industry partners including Santander and Xsens.

He and colleagues have spent time studying and developing control algorithms for tasks such as line following, scanning and position keeping, but also worked on sensor data fusion for path planning and obstacle avoidance.

For the competition, teams are facing four challenges: fleet race, station keeping, area scanning and obstacle avoidance. They will be given a ranking based on their performance and the team with the lowest final total will be crowned the winner of the overall championship.

Dr Wan, who completed a final test with his team on Roadford Lake in Devon this week, said:

“There is growing interest in autonomous sailboats both from academia and industry and the World Robotic Sailing Championship offers researchers the chance to demonstrate and exchange latest developments in this domain. For us, it will be our first time participating in such a competition and we are really looking forward to seeing how our ideas compare with others in the sector.”

The Plymouth team are looking to develop a series of robust mono-hull, catamaran and trimaran sailing platforms

The Autonomous Marine Systems (AMS) research group comprises a multidisciplinary team working on the application of AI techniques to the navigation, guidance and control of autonomous vehicles, wave energy devices and marine propulsion systems. The group has expertise in a number of areas: 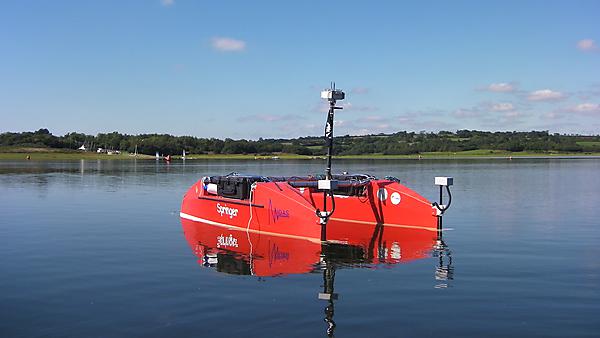