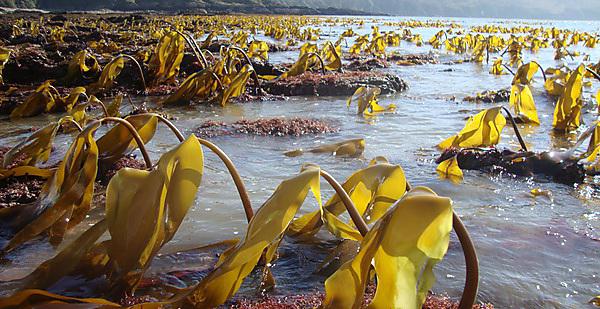 A kelp forest of warm-water Laminaria ochroleuca on the coast of Plymouth, UK, at low tide (Image Credit: Albert Pessarrodona)

The dynamics of kelp forests in the North-East Atlantic will experience a marked change as ocean warming continues and warm-water kelp species become more abundant, according to new research.

Scientists from the Marine Biological Association of the UK (MBA) and the University of Plymouth studied kelp forests off the south west of the United Kingdom.

Here, the warm water kelp species Laminaria ochroleuca has increased in abundance in recent years, probably at the expense of a cold-water species less tolerant to warming seas.

Writing in the Journal of Ecology, the researchers say this is a direct result of climate change and has the potential to alter how species that depend on kelp forests need to function in the future.

However, the study says the situation is not all bad news with some of the functions examined, such as carbon absorption or food provisioning, being maintained or even enhanced.

Moreover, this important habitat will likely survive in the future, in contrast to several other areas of the world – including Japan, Canada and Australia – where kelp forests are disappearing completely.

“As the ocean warms, species are moving up slopes and towards the poles in order to remain within their preferred environmental conditions. Species with warm affinities are migrating to many habitats previously dominated by cold-water ones, transforming ecosystems as we know them. These so-called novel ecosystems feature a mix of warm and cold-affinity species, but we don’t know whether they can retain desirable ecological processes and functions on which human wellbeing relies.”

“The warm-water kelp Laminaria ochroleuca was actually first detected in the UK in the late 1940s, but is now a common sight along the southwest coast. It is predicted to continue expanding northwards in response to climate change, occupying most of the UK and large sections of the wider North-East Atlantic coastline by the end of the century.”

Kelp forests are to coastal seas what the great woodlands are to life on land.

For marine organisms they provide places to live, food and shelter from predators, while for us they fix a large amount of carbon dioxide, and reduce storm and wave energy hitting the coastline. They also provide us with food and materials like gelling agents, and are at the base of food chains that ultimately generate economically important fish and shellfish stocks.

Most studies so far have looked at how non-native invasive species introduced by humans alter ecosystems, with far less attention being paid to the impacts on ecosystem functioning of species expanding into new habitats as a result of climate change.

However, this research found the warm-water kelps essentially acted as a conveyor belt of food production, growing and shedding its leaf-like lamina throughout the year, providing a continuous supply of food. In contrast, the cold-water species only grew during short, discrete periods of the year.

Overall, researchers say the warm water species functioned “faster”, with its organic material being rapidly processed by herbivores such as sea snails and limpets and with faster rates of decomposition.

The study was conducted as part of the MRes Marine Biology degree, jointly run by the University and the MBA.

Dr Andy Foggo, of the Marine Biology and Ecology Research Centre at the University, said:

“Our findings suggest that the proliferation of the warm-water kelp will alter the dynamics of North-East Atlantic marine forests by modifying the quantity, quality and availability of food. In other research we have also seen that the warm-water kelp harbours less biodiversity than the cold species. Such changes in the provision of habitat and food could eventually affect commercially important species such as crabs, lobsters and coastal fish.”

The full study - Can ecosystem functioning be maintained despite climate‐driven shifts in species composition? Insights from novel marine forests by Albert Pessarrodona, Andrew Foggo and Dan Smale – is published in the Journal of Ecology, https://doi.org/10.1111/1365-2745.13053. 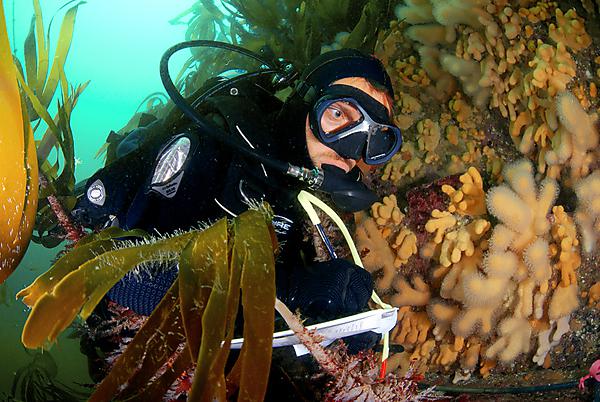 A diver assessing the abundance and health of cold-water Laminaria hyperborea off the coast of Plymouth, UK (Image Credit: M Sayer)