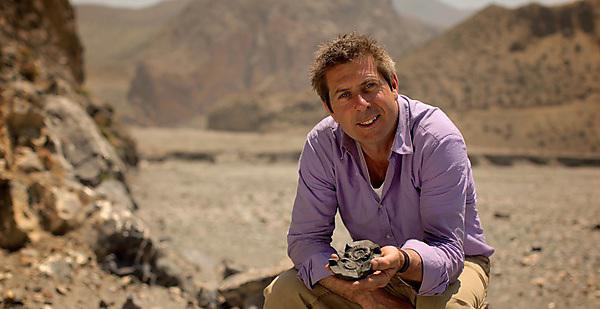 A scientist and broadcaster from the University of Plymouth has earned a prestigious international accolade from the Geological Society of America (GSA).

Professor Iain Stewart, Professor of Geoscience Communication and Director of the Sustainable Earth Institute, has been awarded the GSA's President's Medal by outgoing President Isabel Montañez.

The award is in recognition of his outstanding and sustained efforts in communicating and promoting the geosciences to the international public and scientific community.

In recent years, Professor Stewart has fronted a range of television documentaries including Planet Oil, Earth: The Power of the Planet, Volcano Live and Rise of the Continents.

He has also published research suggesting earthquake faults may have played key role in shaping the culture of ancient Greece and that the highest known sea levels could have created the iconic shape of Mount Etna.

“It is fantastic to get such an endorsement from one of the biggest professional geoscience communities in the world for the novel work that we have been pioneering here at Plymouth – trying to convey to people just how critical Earth science is for the future well being of the planet and those living on it.”

This is the latest accolade Professor Stewart has received rewarding his efforts to make geosciences more approachable, having been made an MBE in the 2013 Birthday Honours List.

In February 2016, he was presented with the Senior Public Engagement Prize by the Royal Society of Edinburgh in recognition of his exceptional, wide-ranging public engagement through the medium of broadcasting and his work with school pupils and teachers.

And in November 2017, he received the Outstanding Contribution to Public Understanding of the Geosciences award from the American Geosciences Institute in recognition of his academic work and broadcasting career.