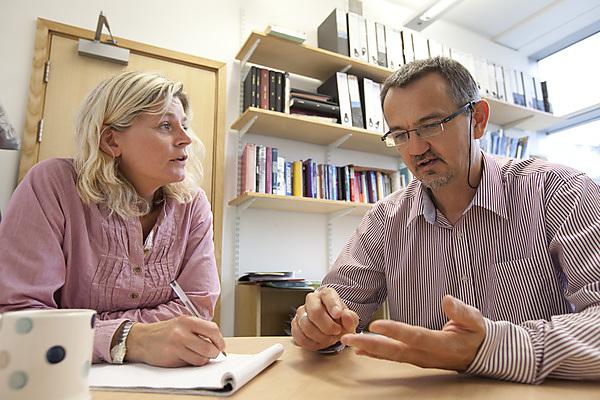 Over 30 per cent of students at the University of Plymouth were over the age of 21 when they started their degree.

Mature students represent a highly diverse group with a broad age range and any generalisations about mature students should be approached with caution.

It is often the case that the decision to return to learning means mature students are highly motivated and committed to their university studies.

Mature students may also have more complicated lives, including caring and financial responsibilities, compared to their younger colleagues. PedRIO researchers held a series of focus groups with mature students at Plymouth who identified the following advantages and disadvantages of returning to study as a mature student.

The following advice is summarised from the focus group discussions with mature students at the University of Plymouth:

Our inclusive teaching with mature students page provides further guidance on creating an inclusive environment for mature students and outlines some of the specific concerns they may face in relation to returning to study.

The following advice comes from a current Plymouth mature student and may be useful for staff in identifying key areas of concern:

"You’re never too old to learn, but it does take time. When I first started the learning process, I thought it would be easy. It’s not! Years of working does not prepare you for learning again, so your first year may be more difficult than you first thought. This is not a bad thing, as it will set you up for the rest of your degree. It can also be intimidating, as the younger students appear to be finding it easier than you, but you have to appreciate that most have just graduated from college and they are used to this. If you are anything like me, the first year was spent learning to learn once again, but see it through and reap the benefits."

"Talk to the lecturers – most of them have an appreciation for mature students, because we have made the commitment to learn and they will support you and provide helpful advice. Becoming a subject rep is also a great way to get to know staff and students and develop your skills"

"If involved in any group activity, try to work with the younger students – younger students may be intimidated and if you are as unfortunate as me, you may also be the same age as their parents. They may not make the first move, so I’m afraid it’s down to you to break the ice. It is a difficult barrier to breakdown, but once your do you will see the benefits.They can learn plenty from your experiences and will grow to appreciate your advice and maybe your leadership"

The experiences of mature students

As a mature student it’s a very different experience...You feel quite separate I think.

Watch our students talk about the experiences of studying as a mature student.