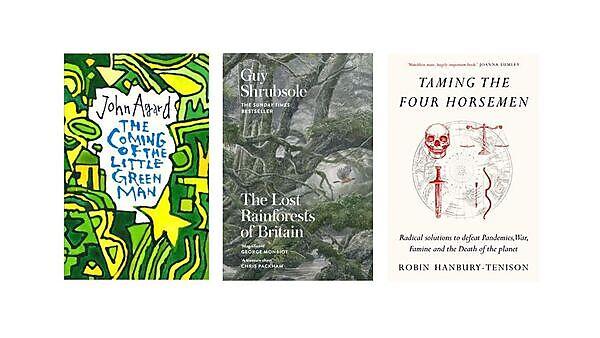 Save event
Welcome to Plymouth Green and Science Book Club's March event. Our Zoom meeting this month will be discussions on three books – you do not need to read all or any of them, although you may feel inspired to do so after learning about some of their contents.

The Coming of the Little Green Man by John Agard (poet)

Publisher's synopsis (credit: blackwells.co.uk): John Agard has been broadening the canvas of British poetry for the past 40 years with his mischievous, satirical fables which overturn all our expectations. In The Coming of the Little Green Man, his eighth Bloodaxe collection, we enter a world of play and parable – in which the little green man stands for all pesky outsiders – in provocative poems charged with contemporary resonance. Which box should the little green man tick on the question of identity? Will the little green man survive as a minority of one in a multiracial London? What if the little green man volunteers to give blood to 21st-century humankind? Winner of the Queen's Gold Medal for Poetry, he brings to bear his trademark trickster wit that bridges the metaphysical and the political, the comic and the poignant, the oral and the literary. His Alternative Anthem: Selected Poems (2009) was followed by Travel Light Travel Dark (2013) and Playing the Ghost of Maimonides (2016).
Discussion of this book will be led by Alan Ramage.

The Lost Rainforests of Britain by Guy Shrubsole

Publisher's synopsis (credit: blackwells.co.uk): In 2020, writer and campaigner Guy Shrubsole moved from London to Devon. As he explored the wooded valleys, rivers and tors of Dartmoor, Guy discovered a spectacular habitat that he had never encountered before: temperate rainforest. Entranced, he would spend the coming months investigating the history, ecology and distribution of rainforests across England, Wales and Scotland.
Britain, Guy discovered, was once a rainforest nation.
This is the story of a unique habitat that has been so ravaged, most people today don't realise it exists. Temperate rainforest may once have covered up to one-fifth of Britain and played host to a dazzling variety of luminous life-forms, inspiring Celtic druids, Welsh wizards, Romantic poets, and Arthur Conan Doyle's most loved creations. Though only fragments now remain, they form a rare and internationally important habitat, home to lush ferns and beardy lichens, pine martens and pied flycatchers. But why are even environmentalists unaware of their existence? And how have we managed to so comprehensively excise them from our cultural memory?
Taking the reader on an awe-inspiring journey through the Atlantic oakwoods and hazelwoods of the Western Highlands and the Lake District, down to the rainforests of Wales, Devon and Cornwall, The Lost Rainforests of Britain maps these under-recognised ecosystems in exquisite detail – but underlines that without immediate political and public support, we risk losing them from the landscape, and perhaps our collective memory, forever. A rich, elegiac and boundary-pushing feat of research and reportage, this is the extraordinary tale of one person's quest to find Britain's lost rainforests, and bring them back.
Discussion of this book will be led by Tim Purches.

Taming the four horsemen: radical solutions to defeat pandemics, war, famine and the death of the planet by Robin Hanbury-Tenison

Publisher's synopsis (credit: blackwells.co.uk): Our world is facing catastrophes of many kinds, from the climate crisis to global outbreaks of deadly diseases. But could we look back at the collapse of previous civilisations to see what lessons might be learned?
The explorer and campaigner Robin Hanbury-Tenison believes we urgently need to tackle the four harbingers of catastrophe:
The lessons of Taming The Four Horsemen are clear: if we humans are to survive we need to make transformative changes now.
Discussion of this book will be led by .

This event is open to all and no registration is required. Join the Zoom meeting at https://plymouth.zoom.us/j/92837809684 or email Alan Ramage (menzalan@blueyonder.co.uk) for any queries.
Previous March 2023 Next

Plymouth Green and Science Book Club is supported by the: