The Centre for Health Technology, via its European Regional Development Funded project, EPIC (eHealth and Productivity in Cornwall and the Isles of Scilly) led by Professor Ray Jones, has been working with the robotics company Akara since 2017. Based in Ireland, Akara, has emerged from more than a decade of research in artificial intelligence, cutting-edge robotics, applied microbiology and user-centred design.
Our relationship with Akara was born from the collaborative efforts of Conor Mc Ginn, Associate Professor at Trinity College Dublin and CEO of Akara, and the EPIC project, spearheaded by Professor Ray Jones. Our strong connections with Akara are now such that, together, we can bring the latest advancements in robotics to trial in the UK, often for the very first time.
Akara started as a spin-out from Trinity College Dublin, Conor’s host institution, where he and his colleagues identified the need for robots within healthcare. In healthcare settings, for example, staff-time is a limited and expensive resource. Freeing up nurses, doctors or radiologists to perform their central duties, could save the NHS millions and improve quality of care.

Initially, Akara’s focus was on robots such as Stevie, a social robot destined for the care profession.
In 2019, Stevie was described as ‘the world’s most advanced social robot’ and appeared on the cover of Time magazine, named among the Time’s 100 best inventions. In that same year, with Stevie at Reflections, a day centre in Camborne for people with dementia. During the trial, Stevie had to undertake tasks such as leading a game of bingo or simply talking to visitors and staff. Researchers monitored his performance and gathered feedback from staff to test whether Stevie could interact in a fun and engaging way. The research looked at whether Stevie’s presence boosted people’s wellbeing and social interaction, while giving human staff more time to work with individuals needing more attention. This was indeed found to be the case and you can read the full paper. 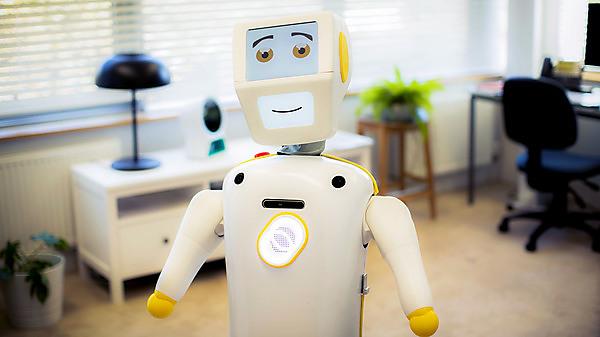 Stevie in the Living Lab

More recently, and due partially to the pressures placed upon all health services from the Covid-19 pandemic, Akara has been designing disinfection robots to be used in clinical settings.
Infections lead to more than three times as many deaths than road traffic accidents and thousands of clinical hours are wasted waiting for rooms to be decontaminated. The danger is not just from COVID-19 but lots of other bugs which lurk in hospitals and care homes such as the widely discussed MRSA.
To provide autonomous support for health care professionals, Akara has developed two disinfection robots; one that cleans surfaces and another which cleans air. Both were the subject of a trial in 2022, in collaboration with EPIC, at the Royal Cornwall Hospitals NHS Foundation Trust (RCHT) on the isolation and endoscopy wards.
Cleaning in hospitals is already semi-automated, with HPV-bombs (Hydrogen peroxide vapour) and air ventilation systems, being used to clean both surfaces and air. But these practices are very time consuming, and that means that rooms remain unused until they are safe for patients and staff to enter. Akara hopes their robots will save staff time and free up beds almost twice as quickly.
To test this, Akara wanted to run a trial in the UK to look at whether their robots are as efficient as current practices in removing dangerous hospital bugs. EPIC researchers also wanted to understand staff perceptions, barriers and facilitators to having the robots there. This feedback is valuable to both the hospital and developers in potentially rolling out the devices further.
Already the results are very promising, we hope the research findings, to be released later this year, will reflect this. 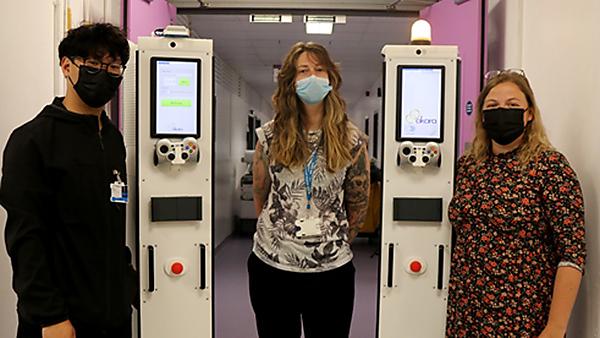