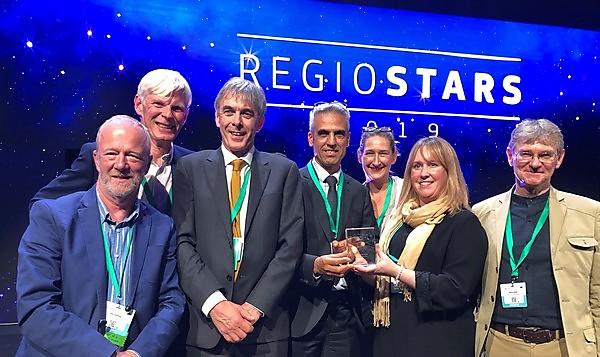 An international building project that is working to update a centuries old construction technique for a new generation of energy efficient homes has secured a prestigious European award.

CobBauge, which is led by the University of Plymouth and funded by the European Union, was a winner at this year’s RegioStars awards in Brussels in the category devoted to sustainability.

Organised by the European Commission, RegioStars recognises Europe’s most innovative regional projects. CobBauge triumphed over four other shortlisted projects on the night and a total of 30 original entrants to the category.

Professor Steve Goodhew, Principal Investigator on CobBauge and a member of the University’s Environmental Building Group, paid tribute to the project and its partners.

“To win this award is clear recognition of the importance of this work in terms of exploring sustainable alternatives to conventional building materials and methods,”

“But it is also well-deserved recognition of all the hard work undertaken so far by the project team, from colleagues at the University, to partners in France and here in the UK.”

Cob houses – made from a mixing of earth and natural fibres with water – have existed in the south of England and northern France for centuries. The construction industry, however, has been unable to create a cob material that meets current thermal building regulations.

CobBauge is working to change that, and is a collaboration between researchers at the University, Earth Building UK and Ireland (EBUKI) and Hudson Architects in the UK, with French partners Ecole Supérieure d'ingénieurs des Travaux de la Construction (ESITC), Parc naturel régional des Marais du Contentin et du Bessin (PnrMCB) and the University of Caen.

Having developed a new method of using cob that will comply with thermal regulations on both sides of the channel (UK (Part L), and France (RT2012)) in phase one, the project received an additional €4 million in funding from the EU this year to launch a second phase, which will run until 2023 and will include the construction of at least two full-sized buildings. The new homes will be occupied and monitored for energy use, thermal conditions and indoor air quality, facilitating comparisons with equivalent, conventionally-constructed homes. The construction process will also be carefully monitored to assess its energy use.

“The judges were particularly impressed by the development of an innovative low carbon technology to build cob houses using local soil and agricultural/waste fibres. It was felt that this technology could make an important contribution to the reduction of CO2 emissions, improved energy efficiency, high levels of indoor air quality and an overall carbon neutral strategy.”

CobBauge phase two was launched in the UK at an event at the Royal Institution of Chartered Surveyors (RICS), in London, with a French event to take place in Caen on the 21st November.

“I would personally like to thank all the people involved, and would urge everyone who is interested to sign up for the French Kick-off event in Caen, and learn more about this important breakthrough in sustainable construction.”

Connect with us on social media.