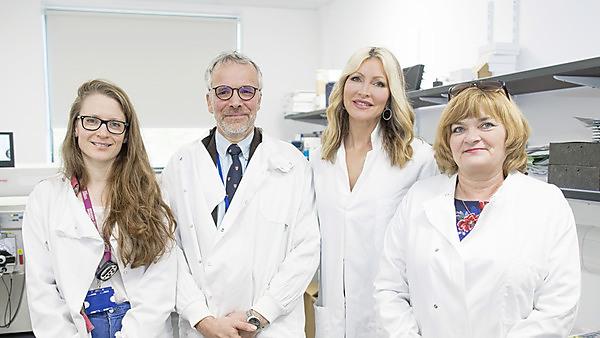 A supermodel who was diagnosed with a brain tumour in 2017 has visited the Plymouth research team working towards finding a cure.

She was diagnosed with a meningioma while taking part in TV show ‘The Jump’, and it was removed following emergency surgery.

Since then, Caprice has become a passionate advocate for Brain Tumour Research – the national charity which recognises Plymouth as one of four centres of excellence in the UK.

As part of her visit, she met Professor Oliver Hanemann, Head of the University of Plymouth Brain Tumour Research Centre of Excellence, along with other research leads and PhD students.

Meningioma are the most common type of brain tumour, and nearly twice as common in females than in males, rising to being three times more common in females between the ages of 35 and 54 years. Although the majority (up to 80%) of meningioma are low-grade, a substantial 20-30% are aggressive and recur on multiple occasions.

“I was very lucky in my case that the tumour was caught early enough and surgery was effective. But brain tumours kill more people under 40 than all other cancers combined – and they receive just one per cent of government funding for cancer research. I’m passionate about raising awareness of brain tumours and the work being done to combat them, so it’s been fantastic to witness first-hand the work being done in Plymouth today.”

Professor Oliver Hanemann, who is also Director of the University’s Institute of Translational and Stratified Medicine (ITSMed), said:

“Currently there are no effective chemotherapy or drug treatments for meningiomas of any grade, so our research is vital and it was great to welcome Caprice to see it first-hand.

“Our research focuses on the proteins that are made and activated in response to genetic differences between healthy and tumour cells, leading to a new range of potential biomarkers and targets against which drugs could prove to be effective, or by which a new understanding of tumour behaviour could become clear. Our team will be looking at whether existing drugs could be repurposed for use in meningiomas, and how new drugs may be developed. Our aim is to do clinical trials and get new treatments out to patients as quickly as possible.”

Also visiting the Plymouth laboratories was Victoria Bradley from Plymouth, who was diagnosed with a meningioma in 2017. The tumour occupied a third of the left-hand side of her brain, and had begun to grow into the frontal lobe – the part of the brain which affects personality. While recovering from her brain tumour and unable to work, Victoria studied and became a qualified hypnotherapist and meditation instructor. She has just launched her website www.naturallycalmtherapy.co.uk

“Looking back, I can’t believe that the tumour had been growing for around 15 years, to the size of a small orange. I laughed as my friends said ‘we always thought you were a bit odd’ and I questioned whether my bolshie personality was down to the tumour or adjusting to survive as the only sister of three brothers. Knowing that there are charities like Brain Tumour Research along with amazing research teams right here in Plymouth gives me great confidence that we’re doing what we can to help.”

The University is recognised as a Brain Tumour Research Centre of Excellence. It is one of only four in the UK with a unique focus on low-grade brain tumours.

Professor Oliver Hanemann and his dedicated team of researchers at the Institute of Translational and Stratified Medicine HQ are carrying out world-leading research to discover treatments and ultimately, a cure for brain tumours.

Join us this March in the fight to raise awareness and vital funds to help save lives.