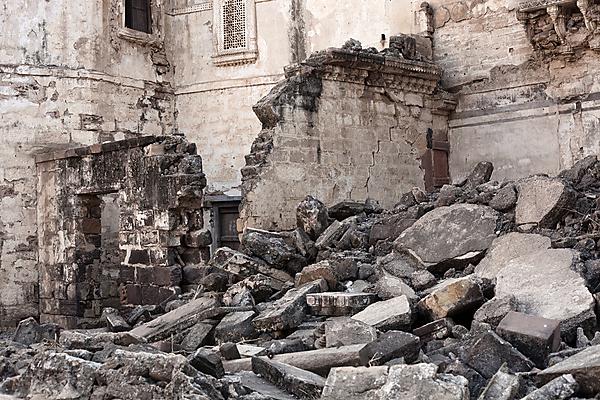 Damage caused by the Bhuj earthquake in 2001, for which many aftershocks nucleated in the lower crust

The mechanisms which cause earthquake cycles to begin up to 40km below the earth’s surface in the interior of the continents are to be explored in a new research project led by the University of Plymouth.

Such earthquakes account for around 30 per cent of intracontinental seismic activity, but very little is presently known about what causes them and the geological effects they leave behind.

Now academics from the School of Geography, Earth and Environmental Sciences have been awarded £451,340 by the Natural Environment Research Council to develop greater understanding about the short and long term behaviour of the lower crust.

In doing so, they hope to increase knowledge of the geological processes, but also to make at-risk communities more aware of the dangers posed by such activity.

Dr Luca Menegon, Lecturer in Structural Geology and Tectonics, is principal investigator of the research with Professor of Geoscience Communication Iain Stewart among the co-investigators.

“Earthquakes in the continental interiors are often devastating and, over the past century, have killed significantly more people than earthquakes occurring at plate boundaries. However those emanating in the lower crust are difficult to study directly, given that the deepest portions of the crust are very rarely exposed at the Earth’s surface and inaccessible for drilling projects, and as a result we have a very poor understanding of them. By combining geological and satellite observations with laboratory work and imaging, we hope to go some way to changing that.”

A significant proportion of seismicity in the Himalaya as well as aftershocks associated with the 2001 Bhuj earthquake in India, which killed around 20,000 people, nucleate in the lower crust.

For this research project – which also involves academics from the University of Leeds, University of Milan-Bicocca, the University of Cardiff, the University of Edinburgh, and the University of Liverpool – scientists will conduct an integrated, multi-disciplinary study of a network of brittle-viscous shear zones on the Lofoten Islands in northern Norway. It is home to one of the few well-exposed large sections of exhumed continental lower crust in the world, exposed during the opening of the North Atlantic Ocean.

The study will link structural geology, petrology, geochemistry and experimental rock deformation, providing a novel, clear picture of the mechanical behaviour of the continental lower crust during the earthquake cycle.

It is anticipated it will culminate in the production of a series of educational material for schools and the general public, but also suitable for global decision makers in areas potentially affected by such hazards.

“At the moment, we do not fully know how to predict earthquakes but perhaps that is because we do not fully understand the signals which rock deformation is sending us. Developing a greater understanding of both the chemical composition and microstructures involved will certainly help us enhance our knowledge of why these earthquakes are occurring. That in turn will help scientists to enhance their work with at-risk communities to mitigate the potentially devastating threats that earthquakes can pose across the world.”

Read more about Dr Luca Menegon and his research