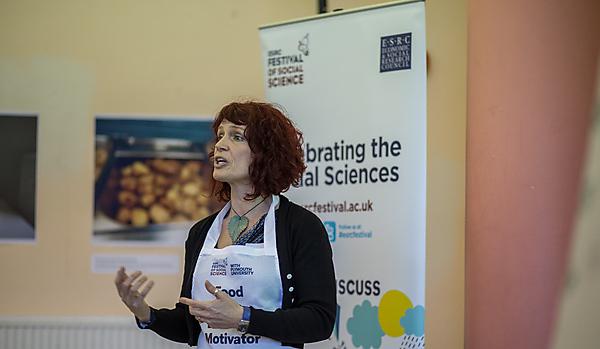 An academic whose research aims to empower marginalised people through their food experiences is set to take her project to a national stage.

Dr Clare Pettinger, Lecturer in Public Health Dietetics at Plymouth University, will be presenting the first phase of her Food as a Lifestyle Motivator (FLM) project to an audience of public health and third sector partners in Tower Hamlets, London on 18 April.

The first phase of FLM, which began in 2014 and was funded by the University’s Sustainable Earth Institute, explored the use of creative methods including participatory action research and photo elicitation to gain insight into how food affected the lives of service users at a Plymouth homeless centre.

Phase two of the project, which is being rolled out in the coming weeks and funded by a small grant from the British Academy and the Leverhulme Trust, will evolve these creative methods into solutions for engaging a broader range of ‘marginalised’ individuals through food activities.

During the pilot phase, six homeless service users were each given a camera and asked to take photos of their own food activities over a 10-day period. This was the only direction they received and, while some took photos of cows in fields, or the milk in their tea, others took photos of their pets, the food they eat and the canteen – all telling a story about what food means to them.

Dr Pettinger said that the way that service users engaged with the research method illustrated that food holds meaning and can mark identity for them, as well as inciting emotion and empowerment.

Following the successful first phase of the study, and a subsequent celebration event in Plymouth last November as part of the ESRC Festival of Social Science, the Tower Hamlets meeting was set up with a view to considering how the project might expand and develop a national multi-centre collaboration.

Dr Pettinger has also recently met with Plymouth City Council’s Director of Public Health, Kelechi Nnoaham, to discuss the project, in light of how it could fit with Plymouth’s inequalities strategy, and how it shows potential as an innovative method of delivery for public health preventative health care.

“The use of creative measures to connect with the service users really highlighted how food can have a positive effect, acting as a catalyst to connect people. It provides meaningful occupation, and, by encouraging the service users to be imaginative, it gave them an outlet for expression that they may not have considered before. We were really interested in what their relationship with food was, and it varied from reminding them of their mum’s cooking to inspiring them to take up cooking as a hobby.

“The service users have complicated lives – some things you would expect, poor nutrition, isolation, addiction and social issues – but there was so much that they took from this project. It is clear from the findings that creative food activities can generate a virtuous circle, where food promotes engagement and engagement promotes interest in self-care.

“It would be fantastic to roll it out further and help more people in other marginalised services. This is why I’m meeting the London team, and it’s my overall aim to help to celebrate food and show that, despite it being central to many health concerns, food can also be a powerful ‘lifestyle motivator’ with a positive impact on social justice.”

Dr Pettinger will also be discussing phase one of the FLM project at a Conversation Café hosted by catering company The Kitchen Table on 6 April at The Barrel House in Totnes.