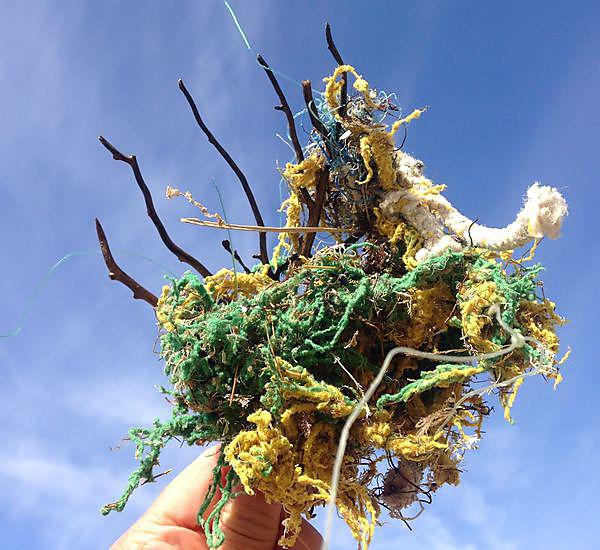 Scientists say that the phenomenon of sea fans washing up on the coastline of the South West will continue unless more is done to prevent commercial and domestic plastic pollution from entering into the marine environment.

In a paper published this week in Biological Conservation, a team at the University of Plymouth has warned that ‘ghost fishing’ – where plastic fishing line and other pollutants entangle marine life – is having an impact upon species such as the Pink Sea Fan.

It follows the discovery of hundreds of ‘sea fangles’ – a term given to sea fans wrapped up in a ball of debris – on beaches across the region over the last decade, including Newquay, Chesil Beach and Wembury.

Dr Emma Sheehan, of the School of Biological and Marine Sciences, and the University's Marine Institute, said:

“Sea fans are important species as they form coral gardens that increase habitat complexity and contribute to biodiversity. This study arose when hundreds of sea fangles were washed up on strandlines at multiple locations around south-west England in the winter of 2014–15. It’s a phenomenon that was first reported in 2006, and we now observe sea fangle strandings every winter in the region, with the 2016 strandings recorded from November onwards, on both north and south coasts.”

There are around 83 species of sea fan in the North East Atlantic, with the Pink Sea Fan (Eunicella verrucosa) one of the few to favour shallow waters, which it does so in many areas off the coast of England. Once collected for souvenirs in the 1960s, it is now one of the few marine species protected from intentional damage by the Wildlife and Countryside Act, 1981, and is listed as ‘Vulnerable’ on the International Union for Conservation of Nature and Natural Resources.

Large colonies may be in excess of 50 years in age, and the fan is characterised by slow growth rates, often just 1cm per year after their first year of development. It is known to provide a habitat for a number of marine species, including the rare Sea Fan Anemone Amphianthus dohrnii, a sea slug called Tritonia nilsohdneri, and the sea snail Simnia hiscocki.

“While the exclusion of demersal towed gear has benefitted a number of Pink Sea Fan populations, dead specimens are still stranding around south west England, entangled in marine debris, which we refer to as a ‘sea fangle’,”

“This process of ghost fishing, where marine organisms become entangled in lost fishing gear is most commonly associated with birds and cetaceans, but it appears, however, that Pink Sea Fans are also being caught up in domestic marine litter.”

Local naturalists and beachcombers alerted University researchers to the presence of hundreds of washed up Pink Sea Fans in 2014, and bundles of sea fangles were collected from Newquay, Wembury and Chesil Beach in January and February 2015 and taken to the laboratory for analysis.

A total of 75 fangles were selected, and photographed, weighed, measured and dissected so that an analysis could be made of the debris contained therein. They ranged in size from 12-77.5 centimetres, and weighed between 12-820 grammes.

Almost all of the tangled bundles contained a central skeletal remain of a Pink Sea Fan, and some contained up to 46 additional fans within the tangle. There was a diverse array of marine debris, including balloons, tights, clothes, plastics, metals and glass fragments from domestic sources. The amount of fishing gear identified was much greater, and included monofilament, gill net (fine), trawl net (thick), fishing line and rope.

Scientists believe that many were detached from the seabed following contact with gill nets, and then picked up debris as they travelled along the seabed on the currents. SCUBA divers from the Seasearch organisation also reported a number of sightings of living sea fans with fishing gear wrapped around them, with, in some cases, skeletal tissue growing over the top.

Professor Jason Hall-Spencer, also of the University of Plymouth, said:

“The cumulative effects of lost fishing gear is an ever-growing problem since most of it is made of non-biodegradable plastic. But beyond that, the variety of debris from domestic sources, demonstrates just how important it is to reduce the amount of litter entering the marine environment. This study highlights the importance of countries adhering to the EU Marine Strategy Framework Directive’s marine litter guidance and demonstrates the need for more ambitious regulation which could be created if the UK re-writes existing legislation following BREXIT.”

The report – Strandings of NE Atlantic gorgonians – can be accessed via the link below.

Pink sea fans are a protected species, yet hundreds of sea fans are found on beaches around the South West UK, entangled in marine debris.