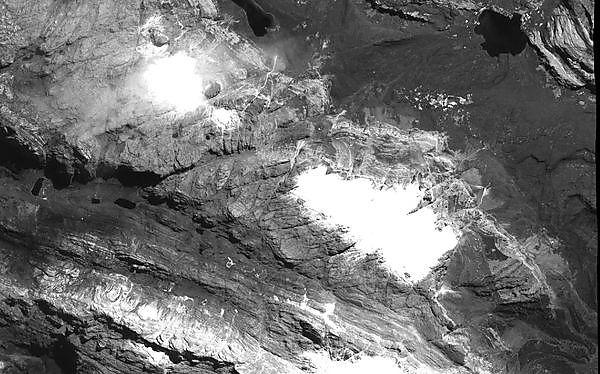 Scientists have obtained high resolution satellite images that paint a stark picture of how tropical glaciers in the Pacific have retreated over the past decade.

The images taken from the Pleaides satellites reveal that the formerly extensive Carstenz Glacier of West Papua has almost completely disappeared, while the once continuous East North Wall Firn has split into a number of much smaller fragments.

The findings have been released by scientists at Plymouth University and the Britannia Royal Naval College Dartmouth (BRNC) and come on the heels of record-breaking temperatures around the globe.

Dr Chris Lavers, Lecturer in Radar and Telecommunications, based at BRNC, said:

“The years 2011-2015 have been the warmest five-year period on record, with many extreme weather events influenced by climate change. So it is not surprising then that the present observed speed of glacier retreat world wide has been historically unprecedented. This is visual confirmation of the ablation of equ atorial glaciers, with the Carstenz Glacier revealed to have almost completely melted away in the last 15 years.”

During the project, Dr Lavers and colleague Dr Victor Abbott, of the School of Biological and Marine Sciences, arranged for the Pleaides satellites to take the images in June 2015 as it passed West New Guinea. These were then compared to similar pictures taken between 2000—2002 and obtained from the Digital Globe Foundation.

The pictures reveal the almost complete disappearance of the Carstenz Glacier – first discovered by explorer Jan Carstenz in 1623. And the extensive East North Wall Firn has retreated from the 1,333,000 m2 continuous area into a number of smaller fragments, the largest of which is 313,334 m2.

At the same time, the nearby Grasberg mine, the world’s largest gold and copper mine, has continued to grow. Dr Lavers said:

“A combination of large-scale open cast industrial mining, high rainfall and enhanced glacial melt is having a profound impact on mineral and sediment transport in the local river systems upon which both the local Amungme tribe and wildlife depend. Tropical glaciers can be considered as ‘canary in the cage’ sensitive markers, responding in near real-time to rapid temperature change trends, and as such, they provide a window to look at consequent environmental impact. Societal change is likely to reflect, on a much magnified scale, some of the local changes, such as water scarcity and deforestation, which will affect the Papuan Amungme tribe.”

This form of remote sensing is useful for areas considered too dangerous or difficult to visit – as has been the case in West Papua.

The report will be published in the Remote Sensing and Photogrammetry Society quarterly publication Sensed.