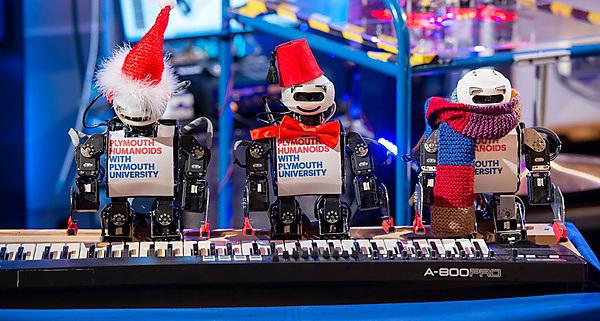 They are used to travelling the world to take on the global giants of robotic sport.

But this festive period, Plymouth University’s robot footballers will be bidding to wow audiences with their musical skills after being invited to take part in a unique televisual event.

The Plymouth Humanoids will take their place in a specially convened robot orchestra and perform at the 2014 CHRISTMAS LECTURES ® organised by the Royal Institution.

Produced by Windfall Films and to be broadcast on BBC4 on December 29, 30 and 31, the lecture series – titled Sparks Will Fly: How to Hack your Home – will explore how three great British inventions (the light bulb, the telephone and the motor) have been transformed in the 21st century.

The robot orchestra will feature in the third of the talks on New Year's Eve, centred around Michael Faraday’s first motor of 1822 and how its creation has led to a series of discoveries with the potential to change the world.

Six of the Plymouth Humanoids will line up at two keyboards and play Beethoven’s Für Elise, before joining robot and human musicians from across the country to play the Doctor Who theme tune.

Stephen Roberts, one of the robotic engineers behind the Plymouth Humanoids, said:

“This may be a big departure from what the robots normally do, but when we were invited to take part in such a high profile event we knew we had to be involved. Our lecture aims to demonstrate the use of mathematics in engineering and we use maths to tell the robots where to move their arms to reach each note they need to play at the correct time. We have spent the last month working on this, and hope their teamwork and coordination will be in evidence throughout their performance.”

The 2014 CHRISTMAS LECTURES ® will be delivered by Danielle George, Professor of Radio Frequency Engineering from the University of Manchester.

Filmed in front of a live audience in the iconic theatre at the Royal Institution of Great Britain, the original science events for children were started by Michael Faraday in 1825 and have long been seen as a favourite British Christmas tradition.

Since 1825, Lectures have been given by many distinguished scientists including Nobel Prize winners William and Lawrence Bragg, Sir David Attenborough, Carl Sagan, Lord George Porter and Dame Nancy Rothwell.

Gail Cardew, Director of Science and Education at the Royal Institution said:

“Our aim with Sparks will fly: how to hack your home is to bring to life the incredible ingenuity, innovation and creativity of engineering. I am delighted that Danielle is presenting this year’s lectures and I am sure that the passion and energy she has for her profession will inspire a whole new generation of engineers.”

More about the 2014 Christmas Lectures