MORE NEWS FROM THE SCHOOL OF ARCHITECTURE, DESIGN AND ENVIRONMENT:

A Plymouth University graduate has earned national acclaim for the quality of work assessing the actual and potential impacts of two construction projects in the South West.

The commendations mean his work was ranked in the top three in each category, with the judges saying he showed a clear understanding of the conventions and challenges surrounding sustainable design practices.

“I was overwhelmed by winning both awards and felt a huge sense of achievement that my work has been honoured in this way. The award has enabled national recognition, not only of my personal work, but the quality of the course provided at Plymouth University.”

Jacob’s submission for the Project category involved drawing up plans for the conversion of a former paper mill in Ivybridge into a vocational college which would benefit students and the wider community. The judging panel said his work was “very well illustrated using a variety of techniques to demonstrate how the fabric and services coordination and detailing produces a workable and sustainable design solution”.

In the Report category, he carried out research into the thermal comfort within a Passivhaus school, which included a detailed analysis of children’s performance and suggested ways this could be enhanced. Judges said the work was “rigorous and focussed” and used “appropriate research to challenge current conventions of sustainable design definitions”.

“This is a very prestigious award and we are delighted for Jacob that he has achieved such recognition for his outstanding work. To be commended in two categories is great recognition for him, and will undoubtedly give him great confidence in his future career. But it is also a fantastic endorsement for us and evidence that we are helping to create graduates who are at the forefront of their field.”

Jacob, who had previously earned four student awards at Plymouth in recognition of the high standard of his work, was awarded £250 for each of his commendations, and granted associate membership of the CIAT – the lead qualifying body for Architectural Technology – for 2014/15.

Jacob Handford, who graduated with a First from the BA (Hons) Architectural Technology and the Environment course, said:

"I was overwhelmed by winning both awards and felt a huge sense of achievement that my work has been honoured in this way." 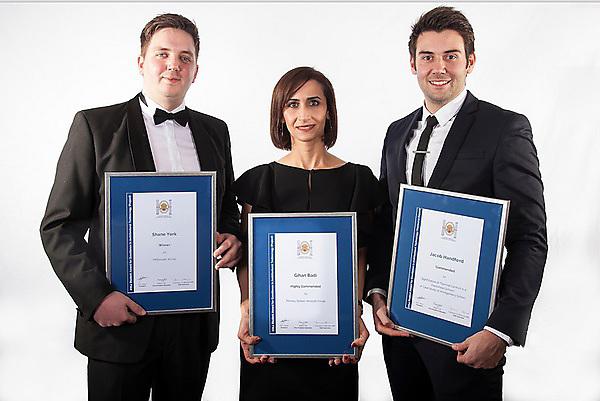 Visit the School of Architecture, Design and Environment website

Read about the Chartered Institute of Architectural Technologists