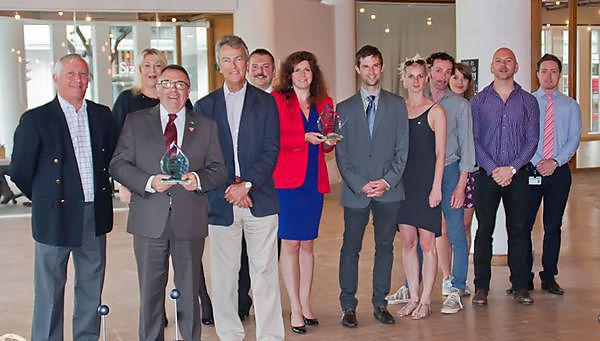 A Plymouth partnership that breathes new life into empty shops and spaces has picked up two major awards in recognition of its contribution to improving the quality, diversity and distinctiveness of the city.

The programme, which enables empty or redundant buildings and land located in the Business Improvement District areas to be used for ‘pop up’ style businesses or community projects, also won the Diversifying the Business Mix category.

The project has been underpinned by research done by the School of Architecture, Design and Environment, and a history of engagement between Masters architecture students and the Waterfront Partnership.

“We’ve been involved since the very outset as we were commissioned by the Council three years ago to produce a report on ‘meanwhile use’ strategy and how they might deal with vacant buildings. Since then we’ve continued to be involved – helping some of the partners such as Effervescent, but also at a strategic level in sitting on the steering group.”

Your Space enables pop up entrepreneurs to apply for leases ranging in length from a weekend to five years. It also provides a single point of contact for people with ideas to develop them further and puts them in touch with landlords and property owners. Currently there are around 25 sites that have been identified as suitable for use.

The judges praised the work of Effervescent – one of the University’s official creative partners in the city – for transforming an empty bank at Derry’s Cross, opening a tea parlour as the first part of a plan to turn the premises into an art gallery, rehearsal space and creative business incubation hub.

“I was blown away when it was announced we had won the national partnership award. We are all working together – not just the Council and the Business Improvement Districts, but Plymouth University and City College Plymouth, they are all bringing something different to the project.”

“Many cities have felt the impact of the recent economic downturn and projects like Your Space are perfect for diversifying the nature and activities of cities. It also supports the business community as it attracts people to the centre, and helps create the sort of vibrant culture that encourages investment.”

The School of Architecture, Design and Environment