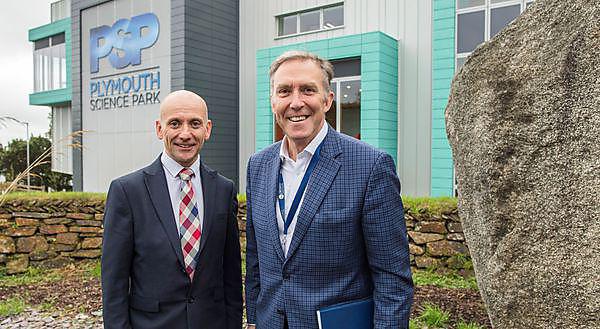 Plymouth Science Park has made two major appointments with the successful recruitment of both a new Chief Executive Officer and a Chair of its Board of Directors.

Ian McFadzen has taken up the role of CEO, moving from the University of Plymouth where he was Commercial Director of the Marine Innovation Centre. And Michael LeGoff, Founder and CEO of Plessey, has been appointed as the park’s Chairman.

With more than 30 years’ experience in the public and private sectors, Ian brings with him expertise in translating research outputs into commercially viable business opportunities, particularly in the fields of biomedicine and life sciences. He is the founding director of two biotechnology companies, including Biovault, the UK’s largest accredited private sector human tissue bank, and has worked with a range of science parks across the UK, including Plymouth, Cambridge, Bristol and Bath.

A former research biologist, Ian has spent the last ten years at the University, and has worked on collaborative R&D programmes across Europe, North America and South East Asia.

Speaking of his appointment, Ian said:

“The primary objective of Plymouth Science Park is to support the University, and in so doing the City, to further its aims and reputation with respect to science, innovation and its commercialisation. It is of paramount importance that the park creates a ‘safe’ environment for entrepreneurial development, supporting a community of like-minded entrepreneurs and science and technology-based organisations who can ‘learn’ from one another other. The park will champion partnerships, collaboration and knowledge exchange – all with the aim of stimulating the economy, creating jobs, and generating graduate opportunities.”

Michael LeGoff has been the CEO of Plessey since 2009, when he founded the company with the acquisition of legacy assets. A renowned physicist and engineer, Michael takes over as Chair of the Board of Directors from John Acornly, who was serving as Interim. He said:

“I am delighted to be taking up this role as Chairman of the Science Park. Our deep appreciation is forwarded to John Acornly for the sterling service he has provided as Interim Chair. Together with Ian at the helm, we can look forward to the opportunities and challenges that lie ahead. Ian has presented a very clear vision of how he sees PSP developing and the role it should play in the city and region. The board has already declared it is highly supportive of the executive team in taking that forward.”

Plymouth Science Park is co-owned by the City Council and the University of Plymouth. Council Leader Ian Bowyer said:

“Plymouth Science Park is one of the city’s huge success stories. It was set up to encourage collaboration and shared knowledge so that businesses here would flourish and now over 1,000 people are employed here. Plymouth is open for business and we look forward to seeing how Ian and Michael will continue to build on this phenomenal success.”

Professor Kevin Jones, Executive Dean of the Faculty of Science and Engineering, and a member of the PSP Board, added:

“The appointments of Ian and Michael herald a new strategic era for the park; one that will build on its current success, and will establish it as a thriving centre for innovation, knowledge creation, and collaboration between high-skill, high-growth businesses, and leading scientists and technologists at the University.”

About the Marine Innovation Centre