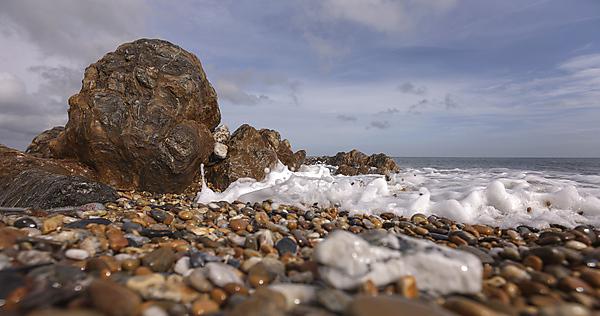 They are among less than 30 scientists from around the world who will be providing hard–hitting messages about the need for closer cooperation to overcome the challenges facing our oceans.

Their invitation to this important and prestigious event is a testament to the excellence of UK environmental science, and underlines its vital role in tackling some of the key challenges facing our society in a rapidly changing environment.

Dr Carol Turley and Professor Richard Thompson will be speaking at the ‘Our Ocean’ conference being held at the US Department of State, Washington, DC on June 16th-17th.

Professor Richard Thompson, of the School of Marine Science and Engineering and the Marine Institute, is a leading expert in marine plastic pollution. Plastic litter in our seas and along our beaches is an obvious and growing problem for marine life, the economy and wellbeing. Less visible, but potentially as damaging, are the microplastic fragments of debris less than one millimetre in size which are now found throughout the world’s oceans. Some come directly from personal care products, such as scrubs and exfoliators, which often contain so-called microbeads as abrasives. Others form from the break-down of larger items such as plastic bags and bottles.

Professor Thompson will draw attention to the unnecessary problems that plastics pose in the marine environment.

He said: “Plastics are durable, versatile and inexpensive materials that bring considerable benefit to society with diverse applications in transport, human-health, education and packaging. Yet 30 per cent of production is for single-use items that are discarded within a year. This creates major environmental challenge with millions of tons of end-of-life plastics accumulating in waste management and as debris in the environment.

"The impacts of plastics debris are considerable, affecting wildlife, the economy and human well-being. Yet the benefits that plastics bring to society can be achieved without the need for emissions of debris to the oceans. This is a problem that we all have a stake in and with smarter thinking on the production, use and disposal of plastics it is one that can be overcome. I hope that this meeting raises awareness, not only about the challenge of plastics litter, but also about potential solutions.”

Dr Carol Turley (Plymouth Marine Laboratory and knowledge exchange coordinator for the UK Ocean Acidification Research Programme) will be describing how ocean acidification is caused by CO2 emissions, its rapid rate of progress and early vulnerabilities. She will discuss its potential mitigation by reducing CO2 emissions to the atmosphere.

Dr Turley has high hopes for wider international recognition of the issue, and a greater focus on how we might curb, mitigate or adapt to any threats from ocean acidification.

She said: “The science is clear - we know that nearly 30% of the carbon dioxide released by human activities has already been absorbed by the ocean, causing acidification of its surface waters. The current rate of ocean acidification is unprecedented in the past 65 million years and will last for many thousands of years. The speed of this change to the basic chemistry of the ocean poses substantial risks for marine ecosystems, from polar seas to coral reefs, through impacts on the physiology, behaviour, and population dynamics of marine animals and plants, with serious consequences for humanity. We have just a decade or so to act to prevent major acidification, I hope that this conference is the first step in a global action to do so.”

Announcing the conference, US Secretary of State John Kerry said: “The ocean fuels our trade. It provides much of the food we eat, the air we breathe. It is home to vast, extraordinary ecosystems from the coral reefs to the kelp forests. But today, this incredible resource is threatened. It’s threatened by unsustainable fishing, by pollution, by climate change. Indeed, how we respond to these challenges is literally going to help determine the future of our planet.”