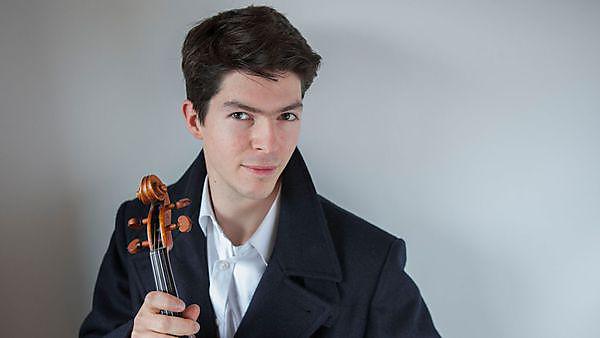 Growing up in a musical family in southern France, Pierre-Emmanuel Largeron first knew he wanted to be a violinist at the age of two. At the time, there was the small complication that he wasn’t tall enough to hold – let only play – the instrument.

But just under a quarter of a century later, the University of Plymouth student’s early ambition has very much been translated into reality. And his successes have just seen him receive one of seven Trophées des Français de l’etranger 2017, which celebrate the achievements of French expatriates and francophones around the world.

Organised by lepetitjournal.com, in partnership with national government, business and media, the awards on Tuesday 7 March were attended by more than 300 personalities, including political and institutional decision-makers.

Pierre is currently in the final year of a PhD, working alongside Professor Eduardo Miranda in the University's Interdisciplinary Centre for Computer Music Research (ICCMR).

Before that, he enjoyed spells as a performance musician in respected venues across France, and studied performance at the Royal Academy of Music in London.

“I have always loved music and performing, and it has taken me from my home in Aix-en-Provence to some of the best known venues in Europe,” Pierre said. “But to receive the ‘Young Talent’ award was quite a surprise as more than 250 people were nominated across the seven categories. It was great to receive the recognition though and to rub shoulders with some inspiring people from all over the world at the awards ceremony in Paris.”

That sentiment of international collaboration is something which is inspiring Pierre’s PhD, and he is now in the third year of his programme with the ICCMR.

The main focus of his work is around using digital platforms to enhance audience participation, particularly with relation to the internet. His ambition is that someone could be anywhere in the world but still be able to appreciate, and even participate in, live performances.

The technology he is playing a role in developing has been used at the last two Peninsula Arts Contemporary Music Festivals, held at the University, but Pierre is now expanding that to make it accessible to wider audiences.

“Composers have sought to include audiences in the creative process since the 18th century, and the psychological effects are widely recognised,” Pierre added. “With advances in technology, such as 3D screens and enhanced acoustics, all you need is an internet connection to enjoy some of the world’s best concerts. It is an exciting area of research to be involved in.”

While in Plymouth, Pierre has also continued to perform, appearing as the soloist alongside the Ten Tors Orchestra in June 2015 and working with Peninsula Arts to organise a series of maritime themed concerts in 2015 and 2016.

Eduardo Miranda, Professor of Computer Music and Director of the ICCMR at the University of Plymouth, said:

“We do all we can to harness our PhD students' talents and I am delighted for Pierre that he has received this award. He is a very talented and accomplished musician, and I look forward to continuing working with him as he nears the completion of his studies.”

Pierre-Emmanuel Largeron, currently in the final year of a PhD in the Interdisciplinary Centre for Computer Music Research (ICCMR), said:

To receive the ‘Young Talent’ award was quite a surprise as more than 250 people were nominated across the categories. It was great to rub shoulders with some inspiring people from all over the world at the awards ceremony in Paris