Around four billion minute fibres could be littering each square kilometre of some of the world’s deep seas, demonstrating that plastic debris is now creating cause for concern in some of the remotest parts of the marine environment.

That is one of the findings of a pioneering international study examining the scale of the presence of microplastics at depths of up to 3500m in parts of the Indian and Atlantic Oceans, and the Mediterranean Sea.

Existing research had shown that in recent decades plastic debris has become almost omnipresent on the world’s coastlines, but the extent of its concentration close to shorelines had not increased in line with predictions based on the production and use of plastic.

However, the current study – led by scientists from Plymouth University and the Natural History Museum – indicates this may be because microplastics have sunk to the ocean floor, with the number of fibres recorded as being up to four times more abundant in the deep seas than in shallow and coastal waters.

In fact, the current study has led scientists to suggest – in areas of the Indian Ocean at least – that around 4 billion fibres per km² would be present in seamounts.

“Marine debris, mostly consisting of plastic, is a global problem, negatively impacting wildlife, tourism and shipping. However, despite the durability of plastic, and the exponential increase in its production, there has always appeared to be a considerable proportion of the plastic debris that was unaccounted for.”

Dr Lucy Woodall, zoologist at the Natural History Museum collected many of the samples and noticed small pieces she thought could be plastics. Dr Woodall said:

“The puzzle for marine scientists has been to establish where plastic debris is going. Part of the answer is that much of this waste is breaking down into fibres invisible to the naked eye and sinking to the sea floor. It is alarming to find such high levels of contamination, especially when the full effect of these plastics on the delicate balance of deep sea ecosystems is unknown.”

Richard Thompson, Professor of Marine Biology at the University of Plymouth and a globally renowned expert on microplastics, said:

"The discovery of substantial quantities in deep-sea sediments is of considerable relevance to our understanding of the potential of these particles to cause harm in the marine environment." 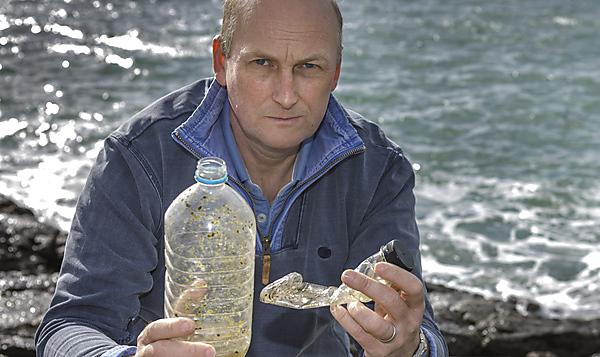 Deep-sea sediment and coral samples were collected from 16 sites worldwide, including submarine canyons, continental slopes, basins and seamounts, and then taken to Plymouth for detailed analysis.

This confirmed microplastics were abundant in all the samples (ranging from 1.4-40 pieces per 50ml of sediment), were commonly around 2-3mm in length and were mostly blue, black, green or red in colour. Rayon – a manmade non-plastic polymer used in, personal hygiene products and clothing – contributed to 56.9% of the total number of fibres seen, with polyester, polyamides, acetate and acrylic among the others recorded.

The report adds that many of these fibres are used in a wide range of domestic and industrial applications and can be introduced to the marine environment via sewage, including from the washing of clothes. They have been discovered in similar quantities in ice cores and the digestive systems of marine wildlife.

“The deep sea habitat extends to more than 300 million km² globally, so the discovery of previously under-reported microplastics suggests there may be even greater accumulation than was previously suspected. A range of shallow water organisms are known to ingest microplastics, which could result in physical and/or toxicological harm, and the extent to which microplastics could have harmful effects will likely be influenced by their relative abundance. The discovery of substantial quantities in deep-sea sediments is of considerable relevance to our understanding of the potential of these particles to cause harm in the marine environment.”

Read about our Marine Institute