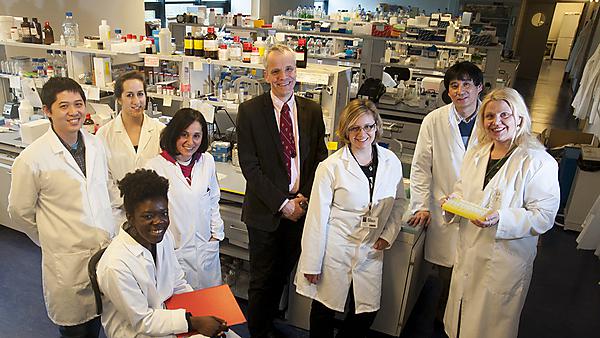 Patients, carers, scientists, clinicians and charities from across the UK will gather today for the launch of an historic new partnership between the charity Brain Tumour Research and Plymouth University. Together they have established a new Research Centre of Excellence, bringing a sharp focus on some of the most overlooked forms of brain tumours.

Around 4,300 people are diagnosed with a low-grade brain tumour in the UK each year. Generally referred to as benign these types of brain tumour, which include meningioma, ependymoma and acoustic neuroma, are graded 1 or 2 on a scale of 4. The lower grade tumours are non-cancerous whereas grades 3 and 4 are cancerous, faster growing and often more immediately life-threatening.

Slower-growing tumours are not immediately cancerous, but they can be just as devastating and bring equally dangerous and debilitating effects to patients and their families. They can cause neurological conditions including loss of balance, weakness, memory loss, poor hearing, epilepsy and personality changes. For many, having a low-grade tumour is like living with a time bomb, wondering when it might suddenly grow more rapidly, become cancerous and spread to other parts of the brain or when the tumour may return after treatment. Sometimes low-grade tumours are located within an inoperable area of the brain.

The new Centre of Excellence will sit within Plymouth University Schools of Dentistry and Medicine and will be led by Professor Oliver Hanemann. Already holding a reputation as a leading facility in Europe looking at low-grade brain tumours, the team will be able to further advance to translational research – taking research from the laboratory bench to drug testing and clinical trials. This will include exploring potential for the repurposing of existing drugs to ‘fast-track’ potential treatments, instead of waiting for new drugs to be developed, tested and trialled and passed for patient use – a process that can take a decade or longer.

By understanding the mechanism that makes brain cells become cancerous in low-grade tumours Professor Hanemann and his research team will explore ways in which to halt or reverse this process. The results from this research will inform investigations into high-grade tumours as high and low grade tumours share some common features. The team will work in collaboration with scientists based at Brain Tumour Research’s network of Centres of Excellence across the UK.

“At present the only treatment options for people with such brain tumours is invasive surgery or radiotherapy or facing the prospect of no suitable treatment. By finding and fast-tracking how drugs are tested, we have the potential to make safer, more effective drug therapies available to patients more quickly.”

Benjamin Mee, Director of Dartmoor Zoological Park and who has an honorary doctorate from Plymouth University – whose story inspired the 2011 Hollywood film, We Bought A Zoo – lost his wife Katherine to a brain tumour in 2007:

“After my wife’s diagnosis I felt we’d been dealt three blows. My wife had a brain tumour, my children were facing growing up without their mother, and my own frustration that so little is known about this disease. Today we are taking a positive step towards a time when others won’t have to face the devastation my family and I have had to face.”

Sam Gadd, a 45 year old social worker from Tavistock in Devon, was diagnosed with a brain tumour in 2012 and is currently undergoing treatment. Sam said:

“My life has changed beyond recognition and is lived from scan to scan. I don’t say this for sympathy but because I’m eager to raise awareness that unlike many other cancers, where research has led to more favourable outcomes, a brain tumour is for life, and currently there is no ‘five-year remission’ with this disease. The future for brain tumour patients can feel bleak but today’s launch is a big, positive day, giving me real hope that better treatments and cures can and will be found.”

With secure long-term funding from Brain Tumour Research, Professor Hanemann’s team will be freed from the limitations and frustrations of applying for one specific project grant after another, able instead to pursue the sustainable and continuous research so desperately needed. Generous civic support is already being given across the city, including from Plymouth University partners Plymouth Albion RFC, Plymouth Raiders, Devon Junior and Minor Football League and Santander.

“We are honoured to be in partnership with Plymouth University. This collaboration will help us in our mission to support people in the fight against this devastating disease. Ultimately, it will lead to better outcomes for patients – from improved awareness for earlier diagnosis, to the development of more effective personalised treatments and targeted drugs. Through the funds generated, we will be able to significantly fast-track progress towards finding a cure for all types of brain tumour.”

Brain Tumour Research currently helps fund – through corporate and public fundraising – an annual £1 million programme of research at their Centre of Excellence at the University of Portsmouth. This relationship with Plymouth University, along with additional new partnerships at Queen Mary University, London and Imperial College in London, will pave the way for a £20 million investment in brain tumour research over the next five years.

You can make a difference today by making a £5 donation on your smart phone or tablet. Simply text RSCH06 £5 to 70070 to support this pioneering research. For more information about the partnership with the charity Brain Tumour Research in Plymouth and how you can get involved visit www.plymouth.ac.uk/campaign