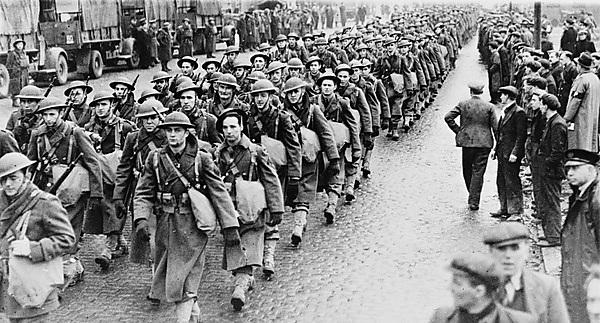 On the 80th anniversary of the arrival of American soldiers in Northern Ireland in the wake of Pearl Harbor, a historian in the Faculty of Arts, Humanities and Business has shed new light on this often-neglected story with a groundbreaking new book.

Northern Ireland, The United States and the Second World War, by Dr Simon Topping, represents the first comprehensive academic study of the political and social impact of the ‘friendly invasion’ by around 300,000 US servicemen during the period 1942-45.

The book is based upon a decade of research, undertaken by Dr Topping in archives in the US, the Public Record Office of Northern Ireland (PRONI), the National Archives in London, and the Roosevelt Institute in the Netherlands.

“On the 80th anniversary of this historic event, many people would be surprised to learn that the first place in Europe that American soldiers set foot during the Second World War was Belfast,”

said Dr Topping, Associate Professor of United States History, in the School of Society and Culture.

“And they brought with them their good humour, gum and nylons, but also criminality, drunkenness and racism.”

The first American troops arrived in Northern Ireland seven weeks after the attack on Pearl Harbor that formally brought the US into the war. Around 6,000 troops were part of that inaugural wave, with thousands more arriving before they eventually departed for the invasion of North Africa that autumn. In October 1943, a second, much larger, influx began, peaking at 100,000 Americans – representing 10% of the population – in January 1944.

The impact, says Dr Topping, could be felt in myriad ways – across politics, sex and race relations. Among the Americans were thousands of black soldiers, who were broadly welcomed by the people of Northern Ireland, in stark contrast to the segregation and racism they faced at home and in the still segregated US military.

“It’s a remarkable period of history, where we witness the intersection of American racism and Northern Ireland’s sectarian divisions,”

“For African American soldiers, however, it was a window into a world without racial segregation.”

Among the many insights in the book are that US soldiers were issued with pamphlets about dating local girls and advising them to avoid alcohol, religion and politics. Despite this advice, there were ultimately an estimated 1,800 ‘G.I. brides’; moreover the presence of the troops ignited strong opposition from nationalist politicians– something that was used by unionists to their own political ends.

An extensive programme of activities for the soldiers was provided as well, including dances, sports leagues and hospitality programmes, while they engaged with the community through events such as Christmas parties for local children. The Americans brought with them their sports, playing baseball on Independence Day and ‘Gridiron’ football at Thanksgiving, but proved resistant to football and ‘this screwy game of cricket!’.

The book also explores the diplomatic and political context for the American presence, particularly with regard to relations between London, Washington, Dublin and Belfast.

“While the period says more about the internal dynamics of Northern Ireland than the Anglo-American alliance, it could be argued that it was a vital part of forging the so-called ‘special relationship’,”

“The war and the American presence undoubtedly helped integrate Northern Ireland into the UK and widened the gulf between it and neighbouring Éire, but its own divisions remained.”

A specialist in American civil rights history, Simon first became interested in the topic while undertaking his PhD on the Republican Party and the African American Vote between 1928 and 1952. During his research, he discovered a reference in the New York Times to an African American soldier executed in Northern Ireland for the murder of a pimp in a drunken dispute over money. Intrigued by this, Simon began to look into the experiences of African American G.I.s in Northern Ireland, and quickly realised there was a much bigger story to tell.

Over the past decade, he has visited various specialist centres, including the Public Record Office of Northern Ireland (PRONI) in Belfast, the Roosevelt Institute in the Netherlands, and the National Archives and Records Administration (NARA) in Washington. Simon has also scoured numerous national and regional newspapers on both sides of the Atlantic to learn more about this fascinating topic.

He has now published four journal articles – with a fifth to follow – while his new book is set to enter the reading list for the degree module on Irish History.

“It’s fitting that the book is coming out in time for the 80th anniversary,”

“My hope is that it proves a comprehensive examination of largely overlooked aspects of the war and Northern Ireland more generally and fills important gaps in the history of both.”

‘Don’t argue politics and watch out for the whiskey’... how GIs coped with life in NI' - Dr Topping's article in the Belfast Evening Telegraph
Podcast of interview with Simon on New Books Network