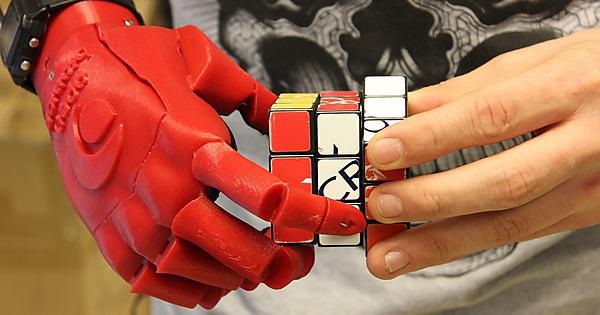 An inventor who began developing prosthetic hands while studying at the University of Plymouth has been named the 2015 winner of the National UK James Dyson Award.

Joel Gibbard graduated in 2011 with a First-Class degree in BEng (Hons) Robotics, and has since developed an advanced robotic hand through his company Open Bionics.

At a fraction of the cost of conventional prosthetics, the hand can be produced in just 40 hours using ‘soft robotics’ and 3D printing.

Using this technology means an entire hand can be printed and assembled in just four manufactured parts, and be sold for under £2,000.

The low-cost robotic hands can perform the same tasks as expensive, advanced prosthetics, including individual finger movement through the use of electromyographical sensors which are stuck to the amputee's skin.

In winning the national award, Joel will receive £2,000 – which he will use in speeding up the prototyping process by purchasing a new 3D printer – and advances to the international stage of the competition. He said:

“We’ve encountered many challenges in designing our hands but the reactions of the individuals we help fuels our perseverance to bring them to market. My aim is for Open Bionics to disrupt the prosthetics industry by offering affordable prosthetics for all.”

At the conclusion of his degree course Joel, now 25 and working in Bristol, scooped three academic prizes including the Best Application of Technological Skills award.

He then spent two years working as an engineer with National Instruments, before making the bold decision to leave his job and focus upon his invention.

Sir James Dyson, globally recognised as one of the greatest living inventors and engineers, said:

“By using rapid prototyping techniques, Joel has initiated a step-change in the development of robotic limbs. Embracing a streamlined approach to manufacturing allows Joel's design to be highly efficient, giving more amputees’ access to advanced prosthetics.”

“I am impressed by how much Open Bionics can improve lives of amputees. By listening to the potential users, Joel is providing the functionality they want at low cost – making appropriate use of technology and 3D printing.”

Open Bionics and the UK national runners-up will progress to the next stage of the James Dyson Award – engineer shortlisting – which will see Dyson engineers whittle down 100 entries from around the world down to just 20.

The results of this stage will be announced on 17 September 2015, and the international winner will be awarded £30,000 to develop their invention. 

Joel Gibbard, who graduated in 2011 with a First-Class degree in BEng (Hons) Robotics, said:

We’ve encountered many challenges in designing our hands but the reactions of the individuals we help fuels our perseverance to bring them to market. 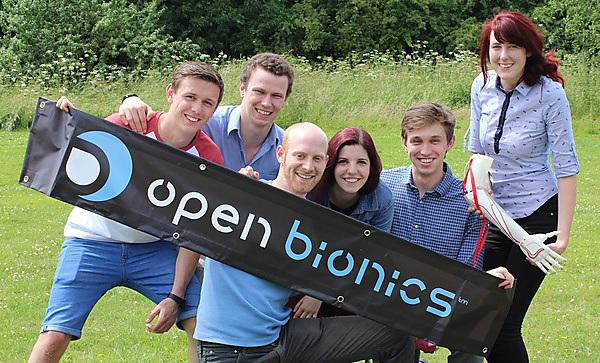 Courses and study with the University of Plymouth

Study BEng (Hons) Robotics at the University of Plymouth

Read more about our inspiring alumni