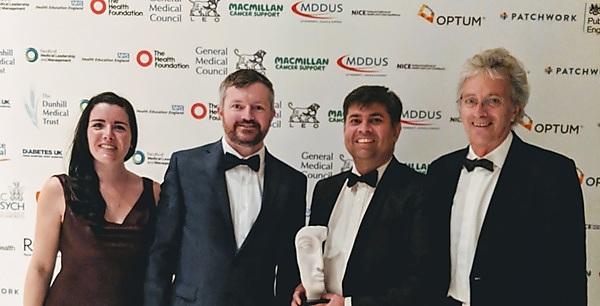 The team behind an epilepsy management app has been recognised with a leading national award for its education work.

Comprised of a team of partners including Dr Craig Newman, from the University of Plymouth and University Hospitals Plymouth NHS Trust, the group who designed, developed and implemented EpSMon won Education Team of the Year at the 2019 BMJ Awards.

EpSMon is designed to help people monitor their epilepsy risks in-between their visits to doctors, and is supplemented by the SUDEP and Seizure Safety Checklist for clinicians.

The BMJ recognition is the third positive outcome for EpSMon, following the team’s first win for Neurology Team of the Year in 2016 and highly commended for Innovation in 2017, representing an unusual degree of recognition from medical peers. This mirrors the achievement of the app in 2018, as it was chosen as one of six NHS projects selected nationally to celebrate digital innovation within healthcare.

Available to download free of charge from App store and Google Play, EpSMon educates people with epilepsy on what areas of their life may contribute to epilepsy risk, providing targeted education where needed and suggestions to seek clinical support when current risk is detected.

This form of education is understood to be a desperate need for all people with epilepsy, who are very often not provided adequate education. Twenty-one people die each week as a consequence of epilepsy related risks, many of these deaths are estimated to be avoidable.

EpSMon is an evidence based approach towards tackling this issue, commissioned by NHS England and supported by the Royal College of GPs and numerous epilepsy charities.

“It’s just amazing news. To have won once was fantastic and twice is unheard of within this sector. Winning the prize was only heightened by winning it alongside a team I greatly admire. Hopefully this recognition will help more people become aware of the app because that’s the whole point of research and digital innovation – making a positive difference to those who need it most.”

SUDEP Action is the only UK epilepsy charity dedicated to the specialised support and involvement of those bereaved by epilepsy. It is committed to reducing the number of potentially avoidable epilepsy deaths each year, both in the UK and internationally.

Jane Hanna OBE, Chief Executive of SUDEP Action, who founded the charity in 1996 following the sudden death of her partner Alan, aged 27, said:

“Empowering both the patient and clinician with the right information and tools are key to assist with discussions – so risks can be positively managed. Improved education of these risks helps to potentially save lives. The project is entirely funded by bereaved families in memory of their loved ones. We are so proud of all that these tools have achieved in their name, and that they will go on to save future lives.”