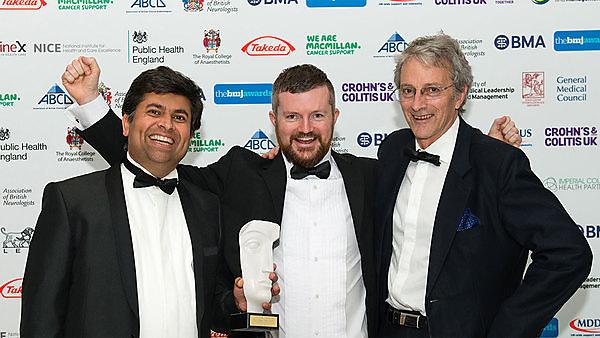 The award recognised a comprehensive and innovative approach to reduce sudden death in epilepsy, an approach which has been adopted by the health care community and which includes the world’s first epilepsy self-monitoring app, EpSMon.

Dr Craig Newman, Research Fellow from PU PSMD, developed the app. He said: “We are delighted to have won this award. This is a great partnership project and one which has true potential to change the lives of people with epilepsy. It is a project which has captured the imagination of the health care community and those with epilepsy and constitutes a superb multi-disciplinary approach to helping people to manage their health. Clearly, apps are the way forward not just for patients but for clinicians too."

Assessing the project, the judges said:

“This is a comprehensive and innovative approach to reduce sudden death in patients with epilepsy, and easily transferable outside the UK."

The second award was the Anaesthesia Team Award which was won by the South West Anaesthesia Research Matrix (SWARM).

It is also supported by PU PSMD and the NIHR Collaboration for Leadership in Applied Health Research and Care South West Peninsula (NIHR PenCLAHRC).

Judges’ comments on the winning anaesthesia team were that:

"SWARM provides good opportunities for career development and will increase the future supply of highly informed, engaged and motivated anaesthetic researchers working for the benefit of patients."