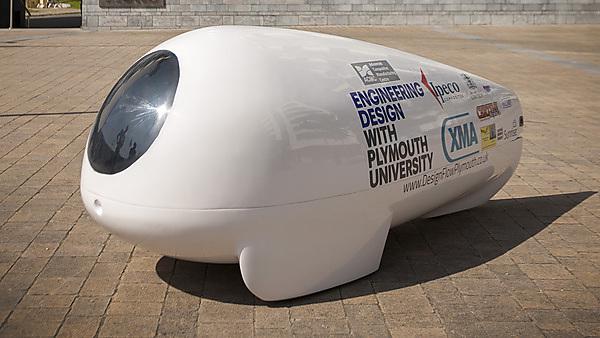 Final preparations are now being made ahead of an attempt by University of Plymouth to enter the record books later this month.

Mechanical and composites engineers and students have spent the past year developing, building and testing a Human Powered Vehicle (HPV).

Now, they are just days away from flying to the United States, where the arm-powered machine will take part in six days of speed trials on the long, straight roads of Battle Mountain in the Nevada desert.

The handcycle, piloted and powered by paracyclist Liz McTernan, needs to travel in excess of 21.39 miles per hour over a 200-metre stretch of tarmac (with a 4km run-up) in order to beat the current women’s benchmark.

“It has taken a lot of hard work to get to this point, and our focus is now on making final touches to the handcycle so that Liz has the best equipment with which to launch the record attempt. The vehicle has a number of complicated components, and throughout our tests we have identified teething problems that we have consistently worked to resolve. We have a lot still to do, and then six days of hard work in Nevada itself, but we are all hoping those efforts will be successful.”

The project has so far involved months of design and production at the University, with the team building on previous experience of working on similar projects.

The handcycle has an aluminium frame and composite shell. It has been constructed with the help of University technicians Julian Seipp, Richard Cullen, Rick Preston and Neil Fewings. The team are now making the final touches to the aerodynamic shell.

Liz McTernan, who is ranked among the top ten of her sport, said:

“This project has always been a huge challenge for me, but I am excited to think it is only days until we fly out to the States. The bike is very different – far heavier and with an alternative riding position – to the one I would normally use in competition. But through extra strengthening work, and support from Lincoln University in lending me a piece of equipment to train on, I am hopeful that I will be in peak condition to challenge for the record.”

The project is being made possible thanks to many sponsors and supporters who have provided funding, equipment or services.

Previous Next
Further reading on the Plymouth University website:
Courses and study with Plymouth University
Find out about our world-leading research
Read about our Mechanical and Marine Engineering courses
More information on other websites:
Read more on the project's blog
Find out more about Liz McTernan