The majority of films about scientific research focus on new or eye-catching findings.

But a new documentary produced at the University of Plymouth explores the methods used by academics to try and unlock some of the stories behind the science.

The 60-minute documentary film Pseudotachylyte, produced and directed by Associate Professor in Photography Heidi Morstang, focuses on an international research project examining the mechanisms which cause earthquake cycles to begin up to 40km below the earth’s surface.

Such earthquakes account for around 30 per cent of intracontinental seismic activity – leading to, among others, the devastating earthquakes which struck Nepal in 2015 – but very little is presently known about what causes them and the geological effects they leave behind.

The research project is led by Dr Luca Menegon, Associate Professor of Structural Geology and Tectonics, and Professor of Geoscience Communication Iain Stewart.

It centres on the Lofoten Islands in Norway which is home to one of the few well-exposed large sections of exhumed continental lower crust in the world, exposed during the opening of the North Atlantic Ocean.

Ultimately, information derived from these ancient fault roots will be used to infer processes occurring at depth along faults that are currently active in modern earthquake zones.

Morstang, whose work consistently aims to bridge the crossover between art and science, filmed the researchers as they embarked on a five-day expedition deep into the Lofoten Islands.

She filmed them preparing for and conducting observations in the field, with the resulting hour-long film providing an in-depth insight into how scientists undertake their research. It also features footage captured in the Plymouth Electron Microscopy Centre.

Morstang, who has previously made films with several academic disciplines, including the London Mathematical Society, said:

“As a documentary photographer and filmmaker focusing on the environment, I have always been fascinated by how field scientists work. For this film, I was interested in discovering how we understand the connections between distant history and the future of earthquakes through landscape, by exploring the medium of documentary film. 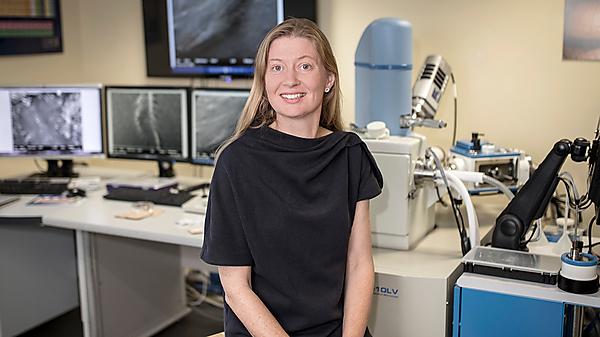 “Filmmaking provides a focus of observing and listening in order to understand what is taking place in the field – the natural laboratory itself. The focus in this project was to portray the inquisitive minds of geologists in order to communicate how one can decipher geological events of deep time. It was amazing to observe the geologists and capture how they try to understand the stories concealed in the layers underneath.

“I wanted the film to show how they undertake those investigations, and how they interact with the landscape they are researching. It is a relationship most people wouldn’t get to see, but I think unlocking that connection between people and place is a key element of understanding research of this nature.”

The documentary premiered at the 2019 Bergen International Film Festival. It was funded by Arts Research, the Natural Environment Research Council and the Sustainable Earth Institute’s Creative Associates scheme. Supported by Higher Education Innovation Funding (HEIF), it is designed to uncover novel and innovative ways of communicating research to a public audience.

A trailer of the film can be viewed on Vimeo, and the film will be distributed internationally once it has screened at various film festivals.