An author and activist who witnessed many of the great events of the 20th century is coming to Plymouth University to talk about his life and experiences.

Harry Leslie Smith, who turned 92 earlier this year, grew up in poverty in Yorkshire during the Great Depression and saw his elder sister die of tuberculosis, with the family being unable to afford medical treatment.

He went on to serve in the RAF during the Second World War, spending several years in Hamburg as part of the Allied occupation, where he met his future wife.

The couple returned to Yorkshire after the war, before emigrating to Canada in the 1950s, and it was after his wife died in 1999 that Harry began writing.

He has since published works about the Great Depression, the Second World War and post-war austerity with his most recent book, Harry’s Last Stand, was released in 2014 and focuses on the history and future of the welfare state.

“Harry is a fascinating character. At the age of 92, he is a link with some of the most momentous events of 20th century British history and it is a delight and honour to welcome him to Plymouth University. He is a passionate and enthralling speaker and hearing Harry speak is a must for any student or fan of history.”

Harry’s talk will take place on Tuesday, 21 April, in the Devonport Lecture Theatre at Portland Square, from 7pm and anyone is welcome to attend. For more information, email Dr Simon Topping at simon.topping@plymouth.ac.uk. 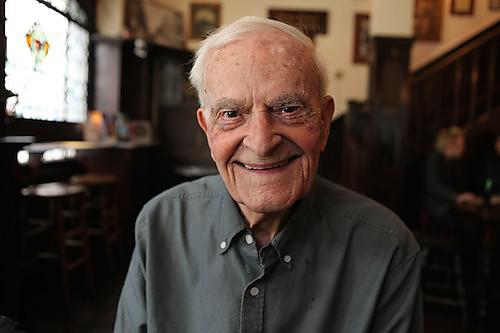 In recent years, Harry has published works about the Great Depression, the Second World War and post-war austerity while his most recent book, Harry’s Last Stand, was released in 2014 and focuses on the history and future of the welfare state.