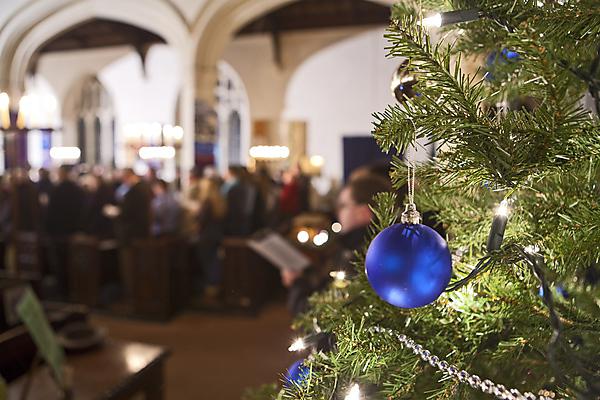 Christmas carol: a song or hymn with the theme of Christmas, traditionally sung during the surrounding Christmas holiday season.


Carols were first sung in Europe thousands of years ago, but these were not Christmas carols as we know them

These were pagan songs sung at winter solstice celebrations, as people danced around stone circles. The word carol comes from the old French word 'carole', which meant a popular circle dance accompanied by singing.

Carols used to be written and sung during all four of the seasons. There used to be May carols and harvest carols, but it is only the tradition of singing them at Christmas which has really survived.

The ancient Roman pagan festival of Saturnalia, which honoured the agricultural god Saturn, took placed near the winter solstice. Due to when this holiday occurred, Saturnalia celebrations are said to be the source of many of the traditions we now associate with Christmas, such as wreaths, candles, feasting and gift-giving.
It was only later that carols began to be sung in church and to be specifically associated with Christmas. 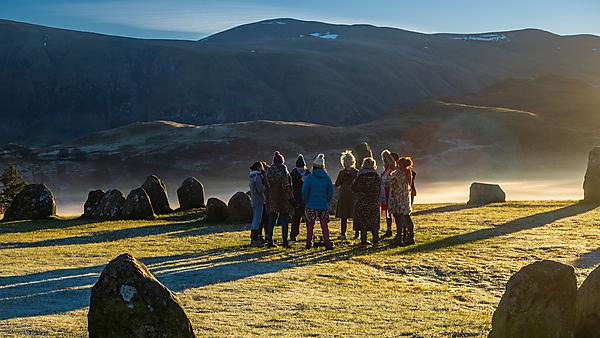 Celebrating the sunrise during the winter solstice

In the 9th and 10th centuries, Northern European monasteries developed the Christmas hymn into a sequence of rhymed stanzas. The Parisian monk Adam of Saint Victor began to derive music from popular songs in the 12th century, which introduced something closer to the traditional Christmas carol.
Early Christianity turned the pagan solstice tradition into a celebration for Christmas and gave people Christian songs to sing. In 129, a Roman Bishop said that a song called Angel's Hymn should be sung at a Christmas service in Rome.

Soon after this composers all over Europe started to write 'Christmas carols' but not many people liked them as they were written and sung in Latin, which was a language that not everybody could understand. By the time of the Middles Ages, many people had lost interest in celebrating Christmas altogether. 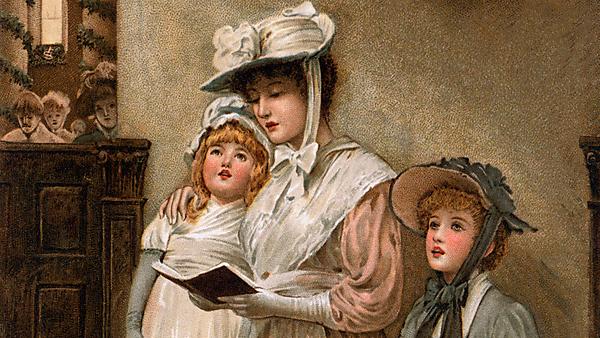 1899 illustration of mother and daughters in church on Christmas Eve

In 1223, Assisi's nativity plays in Italy had people sing songs or 'canticles' that told the Christian nativity story. Sometimes the choruses of these new carols were in Latin, but normally they were in a regional language that the people watching could understand and join in.
The new carols spread to France, Spain, Germany and other European countries. These often took the form of a dance in a circle with linked hands and everybody singing the songs.

Christmas carols in English first appeared in a 1426 work of John Awdlay, a Shropshire chaplain, who lists twenty five 'caroles of Cristemas', probably sung by groups of 'wassailers', who went from house to house.

The word ‘wassail’ was a toast and comes from the Old Norse ‘ves heill’ meaning ‘be well and in good health’. But by the Victorian period wassailers were carolling groups who went around the town and would be rewarded with a hot, spiced drink, known as ‘wassail’. 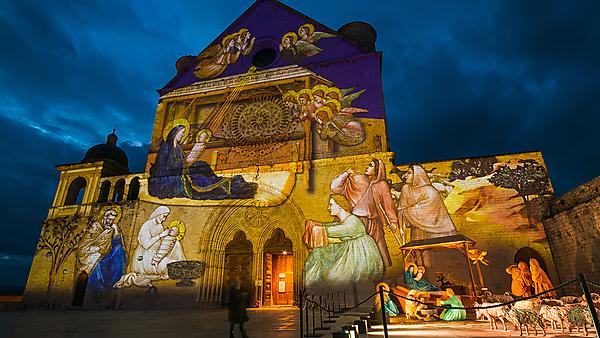 Basilica of Saint Francis of Assisi with projected nativity scene

When Oliver Cromwell and the Puritans came to power in England in 1647, the celebration of Christmas and singing carols was banished as it was judged a pagan festival

However, carols survived as people still sang them in secret. But carols remained mainly unsung until Victorian times, when Christmas became a holiday families could enjoy and music became a big part of the celebrations. It would become a tradition to sing carols after the Christmas meal.

It was during this time that two Cornishmen, William Sandys and Davis Gilbert began collecting old seasonal music from villages all round England. Gilbert published two small collections of carols and Sandys published the lyrics and tunes to over 100 carols.

This created a carol resurgence and many composers created new ones like Good King Wenceslas, with many of these still familiar to us today such as God Rest Ye Merry Gentlemen and We Three Kings of Orient.
The publication in 1871 of Christmas Carols, New and Old by Henry Ramsden Bramley and Sir John Stainer was another significant contribution to a revival of carols in Victorian Britain. 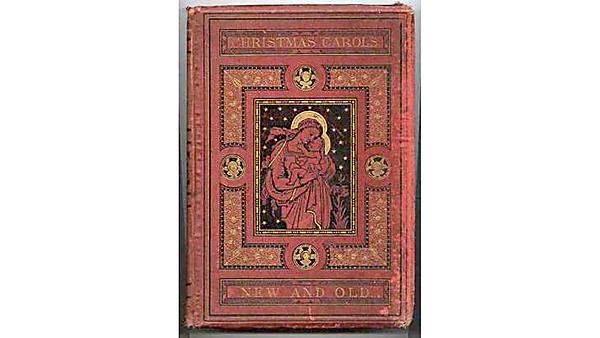 Some carols like Personent hodie, Good King Wenceslas and The Holly and the Ivy can be traced directly back to the Middle Ages and are among the oldest musical compositions still regularly sung.

Many of today's popular carols were printed in Piae Cantiones, a collection of late medieval Latin songs first published in 1582. Early Latin forms of carols such as Christ was Born on Christmas Day, Good Christian Men, Rejoice and Good King Wenceslas can be found in this book.

The words and music of Christmas carols were not always written at the same time. The music for Ding Dong Merrily on High dates back to the mid-1500s but the lyrics are from the 1800s. The tune for Good King Wenceslas is a medieval dance tune from the 1200s, while the words were written in the 1800s.
England’s oldest surviving carol is While Shepherds Watched Their Flocks By Night, which has a 16th-century tune and 17th-century words, but these were not put together until the 19th century. The oldest popular carol, where music and words were written at the same time, is likely to be O Come All Ye Faithful at the end of the 18th century.

Did you know? Jingle Bells was originally named The One Horse Open Sleigh when it was written and composed by James Lord Pierpont in 1857. The song was not initially received well by listeners and took many years to become one of the most popular Christmas songs. 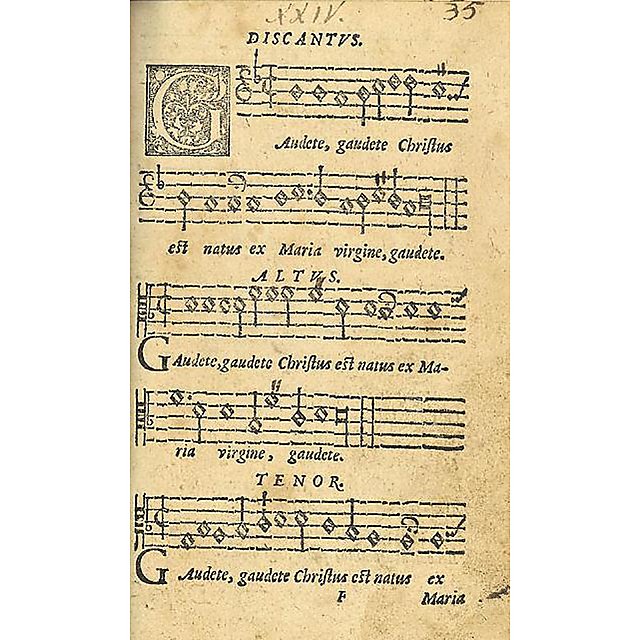 The early Latin carol 'Gaudete' in the original version of the Piae Cantiones, 1582 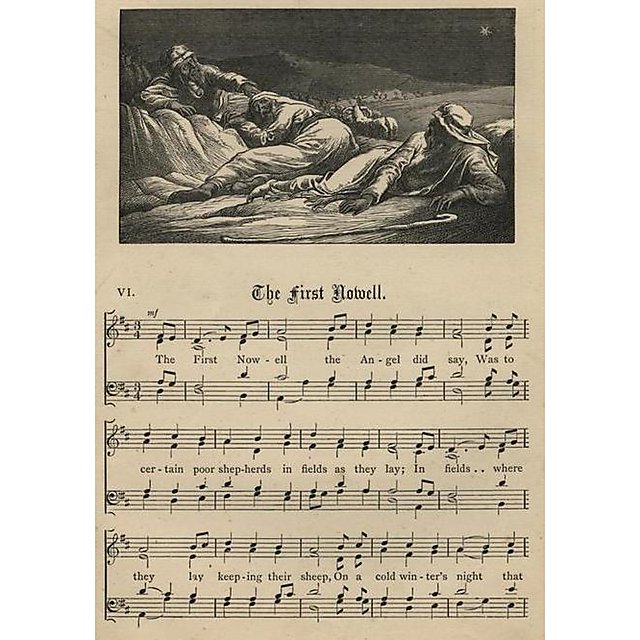 The First Noel from Gilbert and Sandys' Christmas Carols' 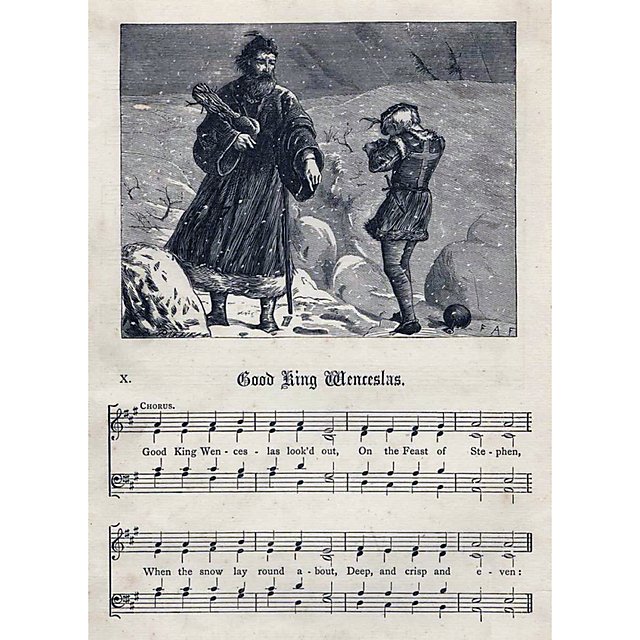 Good King Wenceslas from an 1879 book by Henry Ramsden Bramley

These were led by important locals, such as council leaders, who had the power to take money from the public. They were called Waits because they only sang on Christmas Eve (often known as 'watchnight' or 'waitnight'), when the Christmas celebrations began.
In Charles Dickens' 1854 short story The Seven Poor Travellers he describes a group of musicians performing in a town one winter’s evening: “As I passed along the High Street, I heard the Waits at a distance, and struck off to find them. They were playing near one of the old gates of the City, at the corner of a wonderfully quaint row of red-brick tenements.”

The first carol service is believed to have been held at Truro Cathedral, Cornwall, in 1880. It was organised by Edward White Benson, the First Bishop of Truro, who later became the Archbishop of Canterbury.

Today, carol singers will more likely be found in town squares, shopping centres and visiting hospitals and residential care homes – and rather than waiting to be rewarded with a cup of wassail, modern carollers are more likely to ask for donations to charity. 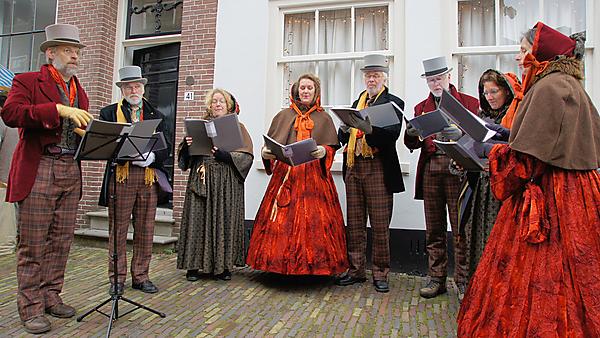 Carol singers singing in the streets 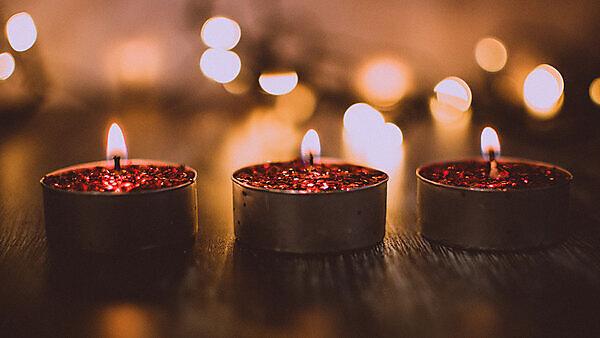