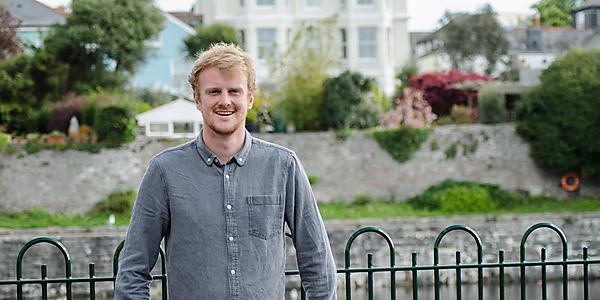 Plymouth geography’s maxim ‘explore the world’ certainly struck a chord with 2014 graduate Matt Bishop who, since leaving university, has teamed up with his best mate Reece Gilkes to take on ambitious, if rather unconventional, circumnavigation of the globe - on a scooter with a sidecar.

In the autumn of 2017 the adventurous duo set out on a journey over 40,000 miles and through 50 countries to raise money for and awareness of the work of charities including Unseen and Freedom United, which work to combat modern day slavery, and ENCA, the Environmental Network for Central America. As they go, the pair have been vlogging and blogging to help share the stories of the everyday lives of the people and communities they meet along the way.

Back in the city last spring for survival training, Matt joked that his time studying geography at Plymouth provided valuable map skills for the challenge but explained how, more importantly, human geography encourages thinking about how different people and communities around the world share similar experiences.

It was Matt’s stage three work-based learning module, in which he worked for a charity in Cambodia on volunteer tourism, that particularly helped inspire his desire for exploring the world in a way that is ethically sensitive and which helps to foster greater understanding of people’s lives, situations and shared concerns.

"Plymouth was such a cool city to be in and the course gave me an opportunity to study something I had always been interested in. As a geographer, you have got the sea, you can go over to Cornwall really easily and you can go up onto Dartmoor. I was social secretary for GeogSoc for two years and I had a really good community of friends all within walking distance."

Since graduating from Plymouth, Matt has continued working in the volunteer tourism and the travel sector while organising the As Seen From The Sidecar challenge with Reece, a friend from secondary school in Banbury who studied film and video production at the University of East London.

The challenge, if successful, will be a world first and has been officially recognised as a Guinness World Record attempt. By working with a network of NGOs, charities and local experts on route and by telling stories from the people and places they meet along the way, Matt and Reece aim to foster greater understanding of how our actions influence people elsewhere and to inspire small changes to help end modern day slavery and other human rights abuses.

You can find out more about the challenge and/or help them with their fundraising at: https://asseenfromthesidecar.org/