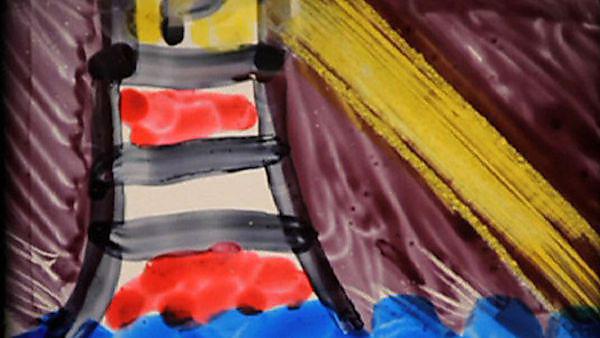 University of Plymouth's Lighthouse 16mm film animation project was initiated and led by artist film-maker Kayla Parker, who worked with students from the After School Media Club at Sir John Hunt Community Sports College in Plymouth, to create an animated film poem inspired by Smeaton's Tower.

Kayla was assisted on the project by student mentors from BA (Hons) Media Arts and MA Contemporary Film Practice, who also documented the project with the Sir John Hunt students. Kayla said of the project:

"I was really impressed throughout with the enthusiasm and maturity of the Sir John Hunt students. It is their first experience of animation, and they responded to the challenge with imagination and energy. To create the poetic, dream-like imagery suggested by the history of Smeaton's Tower, students worked directly with pens and scalpels onto 16mm filmstrips – drawing in miniature, each 'picture frame' is only the size of a small fingernail.

The student mentors who worked alongside me were fantastic, and gave their time generously in supporting the Sir John Hunt students, sharing their knowledge and animation skills, and helping to document the project. We really enjoyed our visits to the After School Media Club – the teachers, Penny Eastel and Glyn Felton, and the Sir John Hunt students always made us feel very welcome.

I'm absolutely delighted that the achievement of the students has been recognised through the many screenings their film has received. After the premiere in University of Plymouth Jill Craigie Cinema, at the Unravel 16mm film animation day presented by Peninsula Arts, Lighthouse was selected for the Animated Exeter Festival, winning a Young Ones Award prize in the 'emerging talent' competition – a fantastic achievement for a first animation. The film has also been screened this summer at the East End Film Festival Cine-East day at the Kobi Nazrul Centre in London."