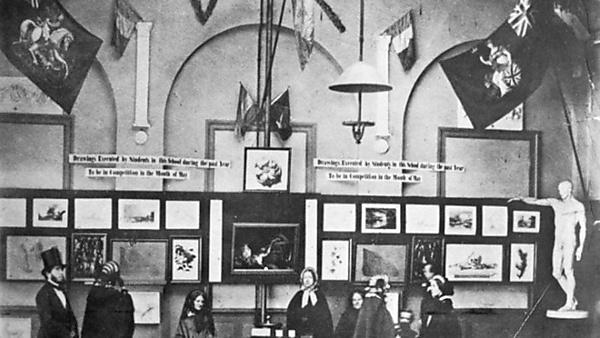 The Arts Faculty of University of Plymouth can trace its origins as far back as the School of Art which was founded in Exeter in 1854.

The Death of Albert, the Prince Consort was to be a trigger for fresh thought and activity on what was needed for Exeter, a great Art and Science Centre and a museum of Science and Art.

Vocational courses of different levels were taught as evening classes where draftsmanship and an artists outlook were essential.

William Green, a well-known painter and exhibitor helped to enrich the cultural climate of Exeter.

In 1948 a 'modern school of art' was formed, fostering an appreciation of the arts by means of lectures and exhibitions.

In 1951 Exeter School of Art was upgraded to college status, being renamed 'Exeter Central College of Art'.

Clifford Fishwick was appointed as principal in 1958. During his lengthy tenure he was to oversee the development of advanced courses of university level and an increased size of student body.

In 1966 Bartholomew Print Workshop was formed by the print-making department, producing books under the name of Bartholomew Books. This was a rich period of creative collaboration between artists and poets.

A new building at Earl Richards Road North was completed in 1973, and shortly after the opening the college was renamed Exeter College of Art and Design.

A proposal was put forward as a new polytechnic, Polytechnic South West, run from Plymouth and in 1989 the new structure of the Faculty of Art and Design in Exeter was in place.

The Faculty of Arts incrementally moved its provision to the main Plymouth campus in 2000, with the faculty being ready for its first complete intake in the city in 2007.