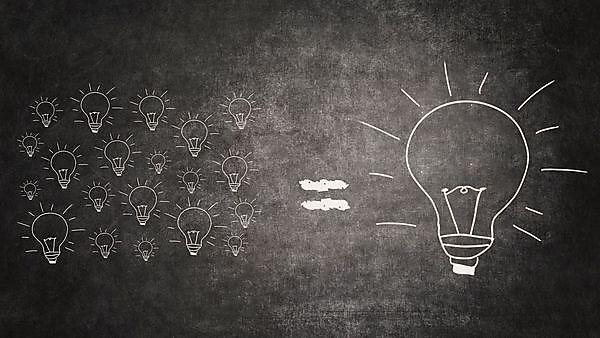 The notion of ‘social justice’ guides our entire suite of criminology and criminal justice, and police and criminal justice programmes. Justice Works brings students together with staff around a range of activities designed to enhance employability skills, foster collaborative partnerships with a variety of social and criminal justice agencies, and provide opportunities to engage in world class research.

Under the banner of Justice Works, and guided by the principle of social justice, staff undertake community based research that has an impact on regional criminal justice policy and practice, and which fosters vibrant and collaborative partnerships with criminal justice agencies and networks. A diverse range of projects are undertaken, with research providing many benefits to agencies, as well as to our students, who see the results of this work within the teaching that staff undertake with them. 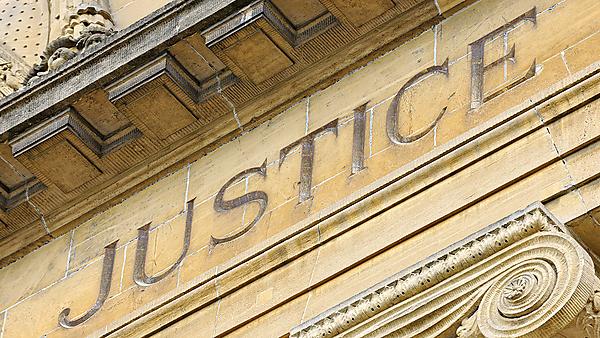 The Resettlement of Women Offenders: Learning the Lessons
Three criminologists from the University, Dr Patricia Gray, Dr Lesley Simmonds and Dr Jill Annison, have completed research in partnership with the Women’s Rape and Sexual Abuse Centre (WRSAC) on the resettlement experiences of women leaving prison. The research involved detailed interviews exploring the ongoing experiences of women shortly to be released from custody, and also the experiences of women who have recently come back into the community. While the research focuses on the situation of women in Devon and Cornwall, the findings are very similar to those found in national research and recent inspection reports.
The challenges of covering such a geographically large and essentially rural area were the main differences. The key finding was that resettlement support for women leaving custody and on their return to the community is inadequate. The situation could be improved by better communication and planning between the various public and third sector agencies engaged in providing rehabilitative support. Increased funding would also enable an improvement in the support that can be offered to women at such a difficult time.
View the research report.

This research was commissioned through Devon & Cornwall Police and Crime Commissioner and Cornwall Voluntary Sector Forum. The research is part of the Cornwall Promoting Change Project. 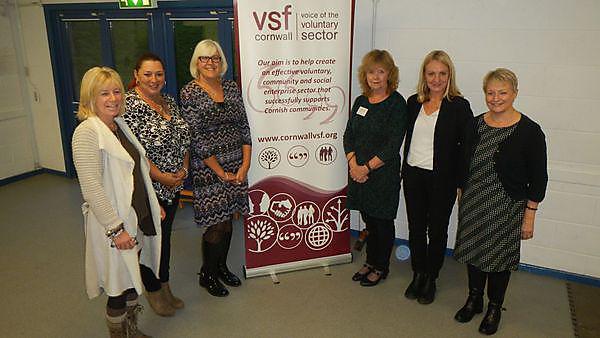 Student engagement is an important part of the student experience. Our student societies are run by students for students. They undertake a range of activities and events, which includes bringing in outside speakers, arranging field trips, running campaigns, and engaging students in social justice oriented work.
We also encourage students to undertake volunteering alongside their studies, with a range of stakeholder agencies, which include the following:
Students can use their volunteering experiences to underpin academic modules, if they so wish. They can do this within stage two and three of their studies.
Work based learning and volunteering can also provide students with a springboard for undertaking research for their dissertations as part of their stage three studies. This enhances engagement between students and stakeholder agencies.

Call handlers with Devon and Cornwall Police
In 2014/2015 students were recruited by Devon and Cornwall Police to work as call handlers. This project was very successful from both the perspective of the police and students, and will be repeated on an annual basis. The project is open to Criminology and Criminal Justice, and Police and Criminal Justice students, to apply.
National Crimestoppers
Students are working as part of the ‘National Crimestoppers Safer U’ project to support community safety initiatives such as property marking amongst the wider University student population. They also engage in other innovative crime prevention measures involving the local neighbourhood policing team.

As part of the criminology and policing degrees, our students have the opportunity to visit the Shanghai Summer School for a month each June. There they learn about Chinese society and customs, broaden their educational horizons and gain vital employability skills in cultural awareness. 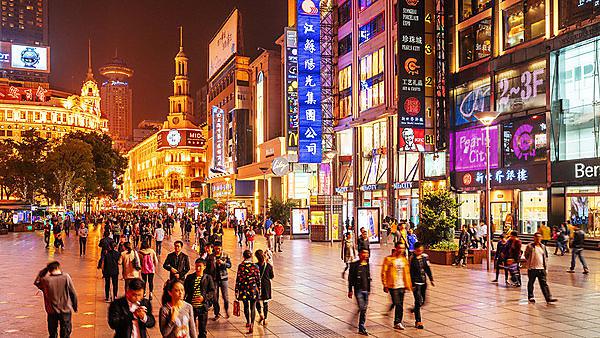 The Student Victim Support Drop-in Service, launched on 30 January 2017 is running again for its third year. Victim Support staff and criminology and law student volunteers promoted the service at Freshers’ Week in September 2018.

The confidential weekly drop-in service runs every Wednesday from 1–5pm during semester teaching time in room 201, 9 Portland Villas. The student volunteers have been fully trained and accredited by Victim Support, Devon and Cornwall to offer support to those affected by crime. Where appropriate, victims will be referred to other services.

Victim Support, Devon and Cornwall is affiliated to Victim Support nationally which has a long history of support for, and campaigning on behalf of, victims of crime. The on-campus service is a further arm to the work that Victim Support carries out in the wider community. 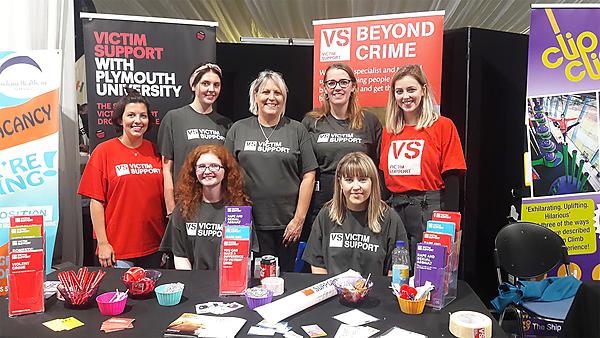 Dr Dan Gilling, Head of School for Law, Criminology and Government, has encouraged and supported the development and continuation of this project, saying:

“Supporting those in need and making a difference goes to the heart of our ethos in the School, and this is going to be of great benefit to our criminology students, to students at the University, and indeed to the wider community.” 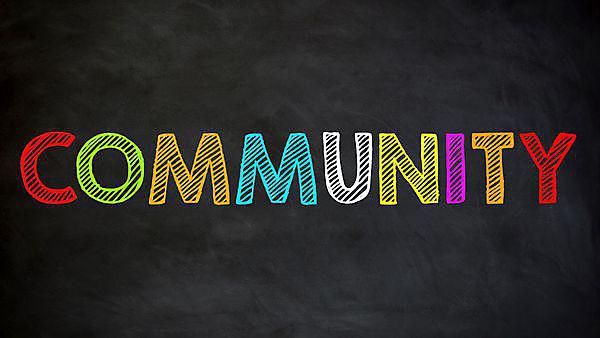 On Friday 22 November 2019, plain clothes officers DI Dave Eames, DC Carly Norris, PC Pete Jones and DS Susanne Lee from the Sexual Offences and Domestic Violence Team (SODAIT), were welcomed to the University of Plymouth by stage 3 students. The officers gave a very interesting and insightful talk enabling students to gain first-hand knowledge of the problem of policing such violence, as well as the difficulties involved with safeguarding the general public. Overall this was a very rewarding experience for officers and students. 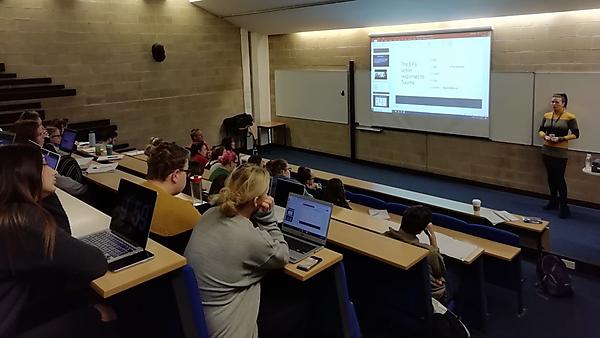 On Wednesday 6 November 2019, Devon and Cornwall police hosted a think tank into knife crime with criminology students from the University of Plymouth. Officers from Charles Cross police station were extremely interested in students’ perceptions and fears surrounding knife crime nationally and locally. The think tank provided an opportunity for students to provide insights into this issue, and help drive local police and partner policy to tackle this key issue. Furthermore it enabled local officers to pilot research with students, before extending the project to the wider public. 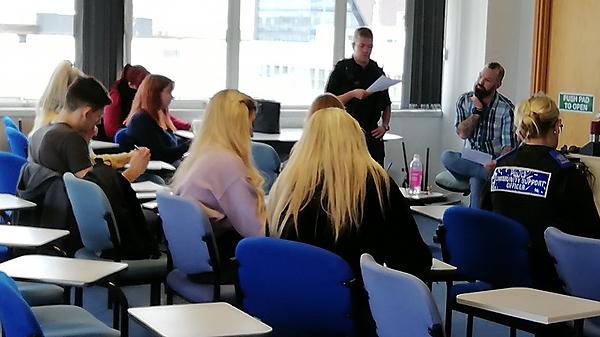 Keynote talk By Dr Lesley Simmonds for the SupportVoc project

Dr Lesley Simmonds gave a keynote talk in Athens on Friday 25 October 2019 at a conference organised to promote the findings of the European Union funded research project, ‘SupportVoC’. The project has explored the implementation of the latest European Directive (2012/29) which sets out minimum standards of support for victims of crime within member states of the European Union.

Greece, Italy, Bulgaria and Cyprus are yet to fully implement the Directive, and so were the focus of the two year research project. Lesley has contributed to this work as a member of the International Advisory Board, providing feedback and advice throughout the course of the project. Lesley’s talk reflected on the way in which the UK had responded to the EU Directive, and how recent changes to the funding of victim services may impact upon the extent to which generic victim services can continue to provide robust support.

On Wednesday 27th September 2017, the University hosted the Launch of a newly established Anti-Social Behaviour Project in Plymouth. The project, funded by the National Lottery, was the result of a bid by Victim Support, Devon and Cornwall and so links between the two agencies are strong. 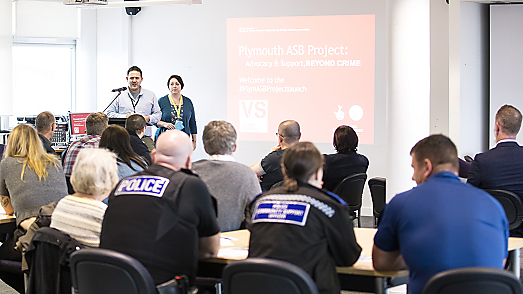 The Anti-Social Behaviour Project employs a manager and two caseworkers, and an initial response officer to provide service users with advocacy, emotional and practical support and referrals to other agencies. Students from the University, working on the Victim Support Drop In Service will have the opportunity to volunteer on this project also.
opened the Launch and spoke about the policy background relating to Anti-Social Behaviour in the UK over the past twenty years or so. Heather Welch; Manager, Devon and Cornwall Victim Support, and Paul Jamieson; Service Manager of the Project, spoke about the project itself, and the complex needs that Anti-Social Behaviour can raise. Delegates then heard first-hand from case workers about the operation of the project.
The Launch was attended by delegates from Plymouth City Council, Devon and Cornwall Police and a range of voluntary sector agencies, so that people working with those who may need the help of the Anti-Social Behaviour Project are aware that the service is available.

On 11 March 2016 Professor Nick Hardwick (Royal Holloway University of London) and Peter Dawson (Deputy Director of the Prison Reform Trust) spoke at a Prison Reform Forum, as part of our ‘Justice Works’ initiative. At that event staff from the criminology team talked about a new ‘Inside-Out Prison Exchange’ programme in the South West, as well as other current research projects. The ‘Inside-Out Prison’ will be a project that involves students working with prisoners, and will therefore be a big learning experience for both. 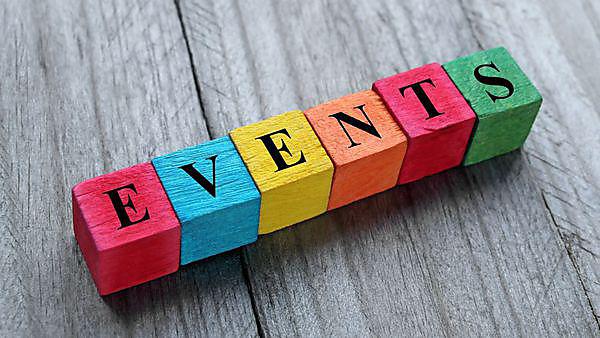 Plymouth Law School hosted the Devon and Cornwall Police and Crime Commissioner Candidates: Question Time Event in April 2016, ahead of the second Police and Crime Commissioner (PCC) Election on 5 May. Candidates running for the role presented arguments for their election and answered questions from the audience, which was made up of students and staff at the University as well as members of the public.

PCCs were introduced by the coalition government, with the first 41 elected across England and Wales on 15 November 2012. When they took office they became responsible for a combined police force area budget of £8 billion.

Their stated role is to cut crime and deliver an effective and efficient police service within their force area, holding Chief Constables and the force to account, making the police answerable to the communities they serve and are responsible for ensuring community needs are met as effectively as possible, working in partnership with agencies at local and national level to ensure there is a unified approach to preventing and reducing crime.

The question time event on 25 April 2016, was a way of raising awareness within the electorate of the forthcoming election, particularly amongst younger people such as the student population.

Criminal Justice in Times of Change: Incorporating a Holistic Model of Offender Advice and Support 2016

The Plymouth Criminology and Criminal Justice school and Justice Works project, joined forces with the psychology department to host the symposium ‘Criminal Justice in Times of Change: Incorporating a Holistic Model of Offender Advice and Support’.

The event brought together delegates from the criminal justice system and mental health services across Devon and Cornwall to enable those with a stake in supporting and healing offenders to engage and identify common areas of concern and co-operation.

Central to the symposium was the Community Advice and Support Service (CASS+) who are based in the Magistrates’ Courts in Plymouth, Bodmin and Truro. Through its work in these courts CASS+ has witnessed many reforms to the Criminal Justice System, which have impacted upon the way that offenders are processed.

The Symposium was a platform for the charity to present their new model of support, signposting and advice for offenders and their families who would otherwise not be subject to supervision by statutory services. The model was identified as a ‘hub’ for those entering the criminal justice system, to support them in addressing their needs as one step towards desistance from crime.

Key delegates attending the symposium included the Office of the Police and Crime Commissioner, the Centre for Justice Innovation and mental health services across Devon and Cornwall.

Victim Support ‘Milestones Event’
On 7 June 2017, the School hosted an event for Victim Support, Devon and Cornwall, where volunteers were presented with awards for lengths of service ranging from 3 to 25 years. Head of School, Dr Dan Gilling, opened the event and awards were given out by Heather Welch, Victim Services Manager.
The criminology team share a long history with Victim Support through other activities such as the Student Victim Support Project, and their ongoing research. It was a pleasure to be able to host this event, and continue the criminology team’s ongoing and valued collaboration with third sector services such as Victim Support. 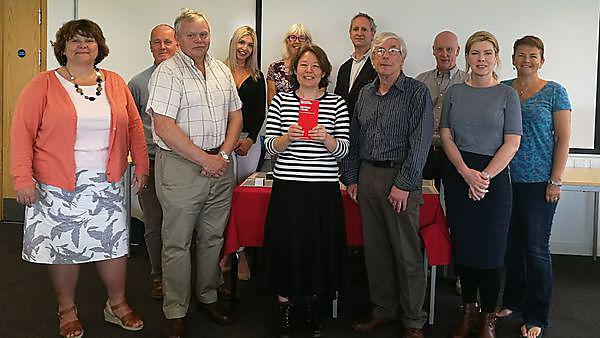