Save event We invite all residents of Devon to attend the first Net Zero Visions workshop. It will provide an introduction to the Net Zero Visions project and next steps, feature inspiring presentations from James McKay, University of Leeds, ’The Man Who Draws the Future' and Net-Zero Task Force members and other experts, plus introductions from communities and the commissioned creatives.

Thursday 27th January 2022 (2 hours, 6-8pm), online: Register for the free online workshop
Net-Zero Visions for the Devon Climate Emergency brings together communities with creative professionals and net-zero transition experts to produce positive ‘Visions’ of six Devon locations as carbon net-zero in 2050. Locations across Devon will have their Vision realised in different media, including animation, illustration, interactive games, and public murals. Community delegates will be asked to feed perspectives from their organisation and community into the creative process. The aim is for the professional-standard Visions to raise public awareness of the Devon Carbon Plan and engage people in the process and possibilities of change.
All residents of Devon are invited to submit their own net-zero visions of their town, village or locale to be showcased in the project gallery.

At the end of the project, a book will be produced as a manual for communities across the country who want to become net zero, featuring climate scientists, sustainability experts and the Devon Visions. A free copy will be distributed to public libraries across the county. Finally, it is hoped that individuals and groups will take and adapt the ‘Net-Zero Visions’ idea to their own projects and purposes, in ways unforeseen by the project originators!

One of the creative professionals joining the workshop, is James McKay, 'the man who draws the future'. James McKay is an artist who works with scientists to communicate their research. In particular, he paints visions of both ancient/prehistoric and future worlds. James has led large collaborative projects funded by the Royal Academy of Engineering and the University of Leeds under the title 'Dreams of a Low Carbon Future', which involved creating graphic novels showing the UK as a positive, sustainable zero carbon society in the year 2150.

James has made a name as 'The Man Who Draws the Future' and regularly gives talks to communities about using art to envision a positive future, often at the same time as creating 'live' paintings of towns as they might look in a zero carbon future. He is also a founding member of a ground-breaking community-owned nature reserve called 'Long Lands Common' set up to protect and rewild the greenbelt near his home in Yorkshire. 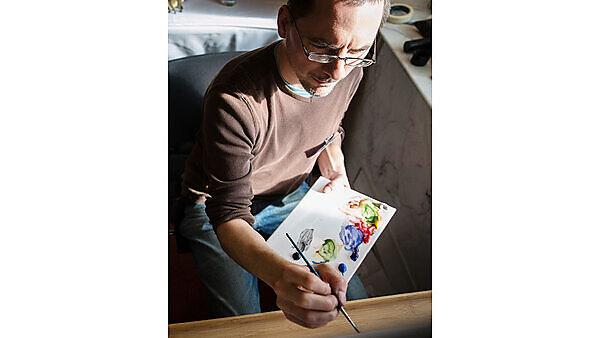