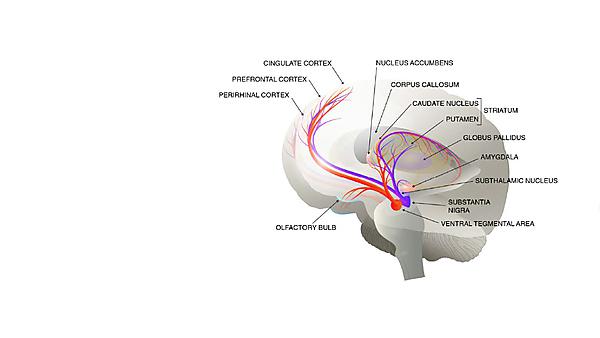 During development cell surface proteins allow to communicate with the surrounding cells and the extracellular matrix for proper proliferation, migration, differentiation and contact formation in the complex network. But also in the mature and aging nervous system they are needed for electrical activity, neuronal communication, survival and even regeneration.

Alterations in cell surface protein signalling have been implicated in the pathogenesis of neurodegenerative disorders such as motor neuron diseases, PD and Alzheimer disease (AD) but also in diseases such depression, attention-deficit/hyperactivity disorder (ADHD) and schizophrenia. There are many cross-talks of different cell surface proteins on neuronal membranes which even can be different concerning their localization in axons, dendrites, synapses and other specialized membrane structures. In addition, they are connected with the intraneuronal processes by a large amount of signalling and regulatory pathways. So far our knowledge about neuronal cell surface protein interaction, signalling and their physiological function is still limited.

Figure 1. The midbrain dopaminergic system is conserved in humans and mice. The cell bodies of the midbrain dopaminergic neurons that are preferentially dying in PD patients are located in the substantia nigra (SN) pars compacta (cell bodies in the midbrain labelled in blue). They innervate with their axons mainly the dorsal striatum - a subcortical telencephalon region – and make up the mesostriatal pathway. Addiction affects dopaminergic neurons of the ventral tegmental area (VTA) mainly innervate the ventral striatum, cortex, amygdala and olfactory tubercle compacta (cell bodies in the midbrain labelled in red). They form the meocorticolimbic pathway. Dopaminergic neurons of the mouse can be visualized by immunohistochemistry using antibodies against tyrosine hydroxylase (TH). 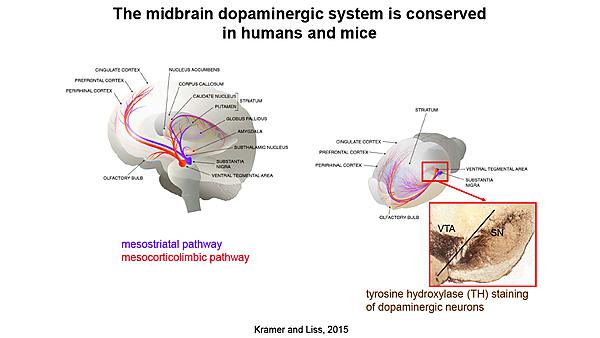 My research group focuses on investigating the cross-talk and function of the glial cell-line derived neurotrophic factor (GDNF) receptors, such as the receptor tyrosine kinase Ret, the neural cell adhesion molecule (NCAM), integrins, N-cadherins, and syndecan 3 in the midbrain dopaminergic system altered in PD patients and drug addicts and in motoneurons innervating the skeletal muscles.

In addition, we analyse the function of different intracellular proteins encoded by genes mutated or linked to PD. We study their signalling mechanisms on a molecular and cellular level as well as in intact animals. Therefore, we use diverse experimental approaches such as molecular biological techniques, cell culture, mouse genetics, histology, as well as behavioural and physiological experiments. 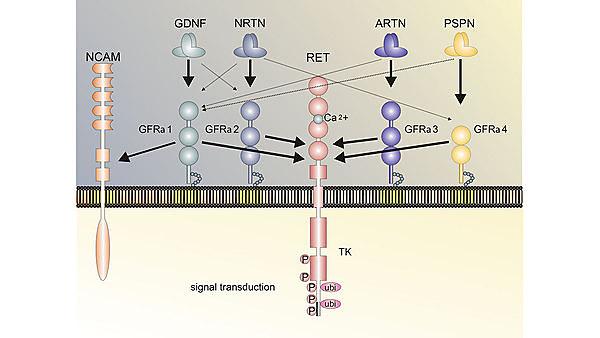 Figure 2. GDNF family of ligands and their receptors. The four members of the glial cell line-derived neurotrophic factor (GDNF) family of ligands, which include GDNF, neurturin, artemin, and persephin, are homodimers which bind with high affinity to one of the four members of the GDNF receptor α family (GFRα1-4). These receptor-ligand complexes can interact with and activate the canonical GDNF receptor Ret, a receptor tyrosine kinase. GDNF can also activate alternative GDNF receptors, such as the neuronal cell adhesion molecule (NCAM). The intracellular domain of Ret can be phosphorylated and ubiquitinylated.

To enhance the analysis of the midbrain dopaminergic and the peripheral nervous system we also developed unique tools for genetic manipulation and in vivo and in vitro imaging and quantification.

Our research supports ongoing clinical trials using GDNF and other Ret ligands in PD patients. So far their results are not conclusive. The results from my laboratory suggest that this approach strictly depends on the Ret receptor being expressed on dopaminergic neurons and can only be beneficial in the early phase of PD when still many dopaminergic neurons are present in these patients. 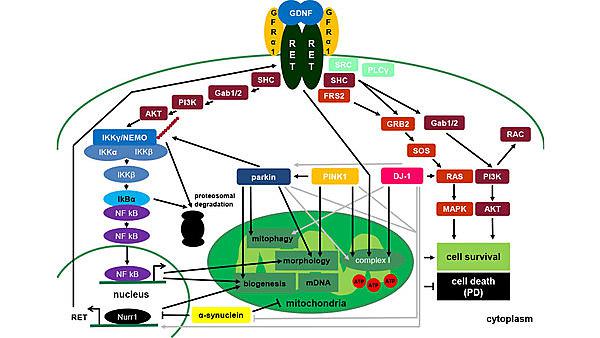