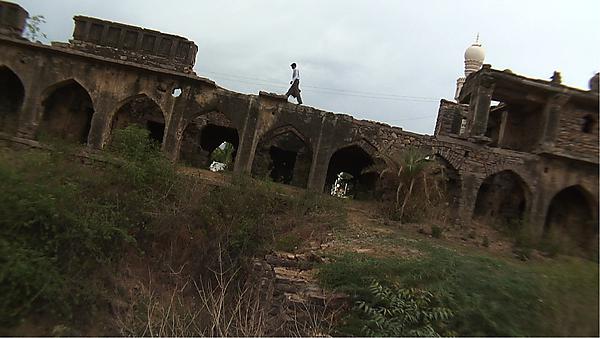 Kaz Rahman is an artist and filmmaker whose style explores the intersection between Islamic artistic expression, the natural elements and contemporary culture. He is interested in using classical elements from Ottoman, Persian, Mughal and Deccani work mixed with new materials and ideas.

In this research presentation, he will present his visual art and film practice in relation to landscape.

His feature films Salaat (2010) and Deccani Souls (2012) can be described as 'Art Cinema' in the tradition of 1960's European and 1990's Iranian cinema while also exploring the thin line between fiction and documentary and themes such as time, memory, narrative dreams and Islamic culture. His work has screened or exhibited at venues such as Anthology Film Archives (New York City), National Film Board of Canada (Toronto), Salar Jung Museum (Hyderabad), India Habitat Centre (Delhi), Andy Warhol Museum (Pittsburgh), The San Jose Museum of Art (California) and Bogazici Film Festival (Istanbul).

Rahman has an MFA in Media Arts (writing/directing) from City College (CUNY), New York City and has taught at Universities and Colleges in Hyderabad, Pittsburgh and Istanbul. He is currently Lecturer in Film at Plymouth College of Art (UK) and has recently authored the book Islamic Art and Modernism: Formal Elements in Painting, Architecture and Film and exhibited Cinematic Landscapes – a collection of his paintings from 2007-17.