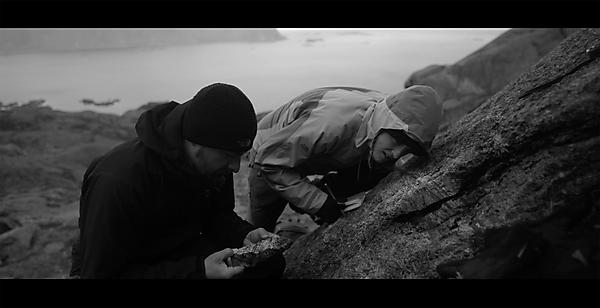 In July 2017 I travelled to the Lofoten Islands in northern Norway to a make a film about a team of international field geologists looking for ‘scars of earthquakes’ in an exposed mountain plateau. They were looking for traces of earthquakes that happened 40km below the surface of the Earth millions of years ago – and that now are visible.

In this research project, filmmaking is used as a research instrument to create a portrayal of a quest for understanding. Working with this film, I am interested discovering how we understand connections between distant history and future of earthquakes through landscape by exploring the medium of documentary film. Filmmaking provides a focus of observing and listening in order to understand what is taking place in the field – the natural laboratory itself. As a filmmaker primarily working with scientists in order to seek an understanding of how they think and work, the focus in this project was to portray the inquisitive minds of geologists. The most striking aspect of working with the field geologists was how they saw and explored the landscape. Not only the relatively vast area of the plateau itself, but the real focus on minutiae details: the grains of the rocks, the geometry of patterns at the plateau, seeing lines and making connections between those – and then discussing potential conclusions.