The Four Continents is a collection of large-scale sculptural forms, which sit at the intersection of art and design. They are the outcome of an iterative research process of making, dissemination and reflection. These forms have been produced through an over-arching research question that investigates the creative potential of using 3D scanning and printing techniques, not just to replicate/reproduce original artefacts, but to transform scales and spaces and generate a new genre of design and sculptural artefact and assess its value.

The research represents a departure from traditional fixed heuristics as it moves between the virtual, the actual and the participatory, enhancing debates within object ontologies. The groups of objects, digital prints, sound works, projections and installations, have been part of the overarching research investigation and disseminated internationally (see exhibitions in Holland, Canada, Italy) and critically underpinned with writing (see reference to peer reviewed conferences in USA, London, India, France) over a period of eight years. The Four Continents installation was originally scheduled to be exhibited in 2020 by the V&A, but has been delayed due to COVID.
The research has its roots in two award winning exhibitions in 2012 and 2014 (Cabinet and Envelope Exhibitions) where archives and objects were made available from The Box Plymouth and V&A London to explore the representations of imperial landscapes, portrayed as a group of commodified artefacts. It does this by using machine vision and fabrication to ‘un-make’ the original artefacts and create virtual moulds, developing a change in artefact perception.
The significance of the research, questions whether these artefacts influence our interaction with the world not only through the direct use we make of them, but also through the meanings we associate with them. Outcomes have shown how historical museum objects can be transformed for new audiences, developing new knowledge and interpretations of collections. This research additionally developed new digital scanning and fabrication techniques and to re-imagine the innovation and cultures embodied in heritage artefacts.

Rendering of the Four Continents Image at the V&A - actual installation postponed due to Covid restrictions
A digital re-interpretation of a group of 18th-century porcelain figurines by William Cookworthy; which themselves represent an historic technological breakthrough 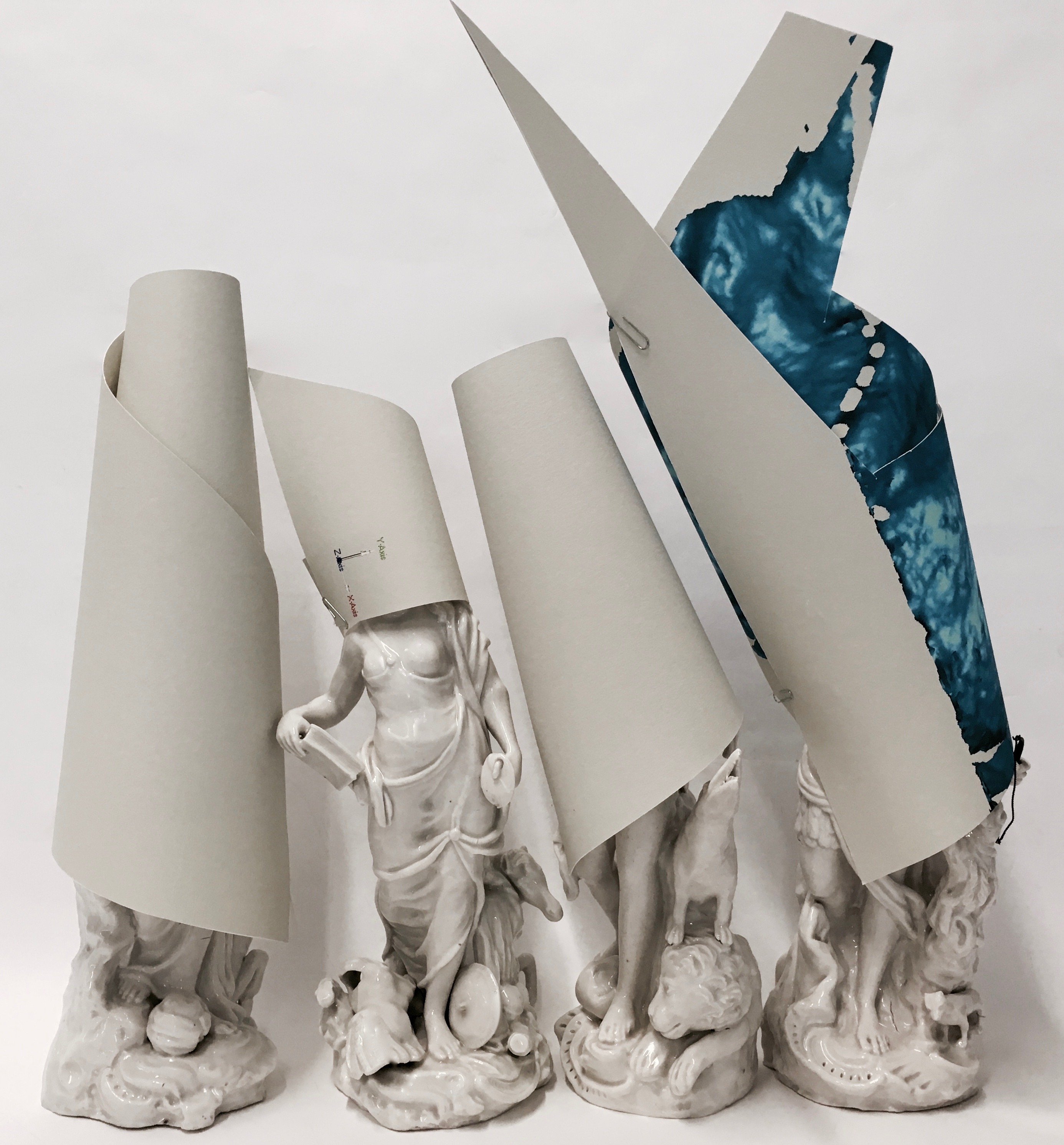 Exhibition in Design Latitudes Alberta, Canada 2015
3D printed with original clay body porcelain from Plymouth using original 18th Century recipe. The changing of platforms for curation and display has lent itself to the re-contextualization of these objects and how they can be understood by new audiences

A collection of 3Dprinted ceramic sections, developed on a Lutum printer for Dutch Design festival
Research focus: the use of scanning technology, principally lidar to generate highly detailed replications of the original 18th century artefacts. Physical data is gathered, processed and then moved into how it can be seen within a contemporary context