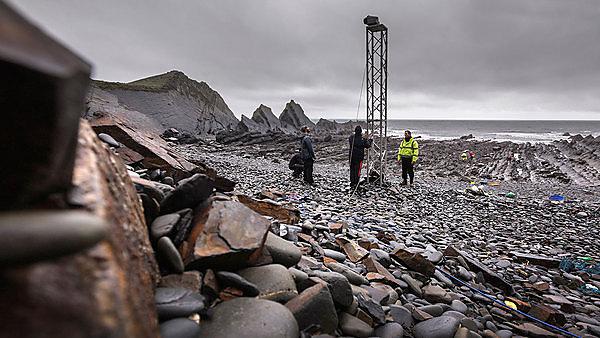 Compared to sandy beaches, relatively little research has been directed towards understanding the response of gravel beaches to waves and this has led to the development of a rather broad approach to their morphodynamics, based largely on description or inference of process, rather than actual measurements (Carter and Orford, 1993). Two features in particular distinguish gravel beaches from their sandy counterparts: steeper beach gradient and much greater sediment permeability (Buscombe and Masselink, 2006). As a result of the steeper beach slope, waves tend to break over a shorter distance and more violently than on a sandy beach. Most of the sediment transport takes place in the swash zone, rather than the surf zone, giving rise to the development of swash morphology (berm, cusps, step), instead of nearshore bars, troughs and rip channels. Due to the greater permeability of gravel compared to sand, in/exfiltration effects are expected to be more significant on gravel beaches. Specifically, swash infiltration losses will be greater (Austin and Masselink, 2006), creating asymmetry in the swash transport potential. In addition, vertical flow rates through the saturated bed will be larger and this may also significantly affect the sediment transport potential (Turner and Masselink, 1998).

Our conceptual understanding of gravel barrier response to environmental forcing is well developed (Figure 1). A key factor in determining the response is the degree of freeboard available, i.e., the difference between the elevation of the barrier crest and the run-up limit (Orford et al., 2003), which is directly related to the occurrence of overtopping. For positive freeboard, the barrier remains proud and only the seaward face of the barrier is affected by wave action. Under calm wave conditions and/or a positive longshore sediment budget the waves will construct a berm, while energetic wave conditions and/or a negative longshore sediment budget will result in beach erosion. For a zero freeboard the run-up just overtops the barrier crest and the latter may build up resulting in increased barrier crest elevation. A negative freeboard implies that barrier overwash takes place, causing a lowering of the barrier crest or even breaching. The latter process is the most destructive and occurs when the barrier crest becomes lower than the mean sea level, causing unidirectional landward flow across the barrier and flooding.

Despite our qualitative understanding, we are not able to reliably quantify cross-shore and longshore gravel transports rates, nor confidently predict the morphological response of gravel beaches to changing wave and water-level conditions. Even our ability to make quantitative predictions of the type of gravel beach response is limited. Two parametric models are currently in use for predicting storm impacts on gravel barriers (Obhrai et al., 2008). The Powell (1990) model is based on the concept of an equilibrium beach profile, while the approach of Bradbury (2000) uses a barrier inertia parameter, reflecting the balance between wave forcing and barrier resistance, to assess the occurrence of overtopping, overwashing and breaching. These models are useful in their own right, but cannot be applied to predict the temporal morphological development, because cross-shore and longshore sediment transport rates are not considered. Alternatively, sophisticated processed-based models have been developed that are capable of reproducing complex swash hydrodynamics and groundwater interactions with some confidence (e.g., OTTP-1D; Clarke et al., 2004), but these do not include sediment transport and morphological response. Finally, numerical models developed for sandy beaches may be used to predict the morphological response of gravel beaches, but fundamental differences between sandy and gravel beach dynamics preclude their application without significant modifications. It is a necessary conclusion that there is currently no reliable numerical model available for predicting the morphological response of gravel beaches to changing wave/tide conditions over the short- to medium-term time scale (minutes to weeks).