The explosive ability of volcanoes to both inspire and destroy can now be appreciated by millions of aspiring volcanologists thanks to a new digital version of Volcanoes Top Trumps.

Created by scientists at Plymouth University, the University of East Anglia and Oxford University, the original card game was unveiled last Christmas to motivate young and old to learn more about some of the planet’s most destructive natural phenomena.

The opportunity to pit the power of the mighty Fuji against the eruptions from Stromboli proved hugely popular and now, a new digital version has been released, bringing the devastating impact and natural wonder of 30 of the planet’s volcanoes into homes and classrooms.

The game’s creators, all experts from the collaborative project STREVA (Strengthening Resilience in Volcanic Areas), have ranked the volcanoes based on six categories – explosivity, deadliness, devastation potential, height, unpredictability and wow factor.

“Several volcanoes have erupted recently that have impacted people living on or around them. We wanted to use the card game to highlight how much we know about volcanoes, and this online version will help teach many more people about the hazards that different volcanoes often pose in a fun way."

Professor Jenni Barclay, from the University of East Anglia and Leader of the STREVA Project, said:

“We were delighted when Top Trumps teamed up with us to create the Volcanoes Top Trumps game, and even more so when we saw just how popular it’s been with volcano enthusiasts of all ages. Although the game is great fun we thought long and hard to ensure that the information within it is informative and educational. It’s really exciting that the digital version provides an accessible, free and entertaining way of bringing volcanoes to life at home and in the class room. Better still, you can share your scores with volcanophiles around the world!”

As well as a traditional Top Trumps-style game, the online version will also feature two additional games to help build players’ knowledge of the featured volcanoes.

The ‘quick quiz’ can ask questions from the card statistics but also develops knowledge of the volcanoes, their eruptions and even their plate tectonic setting. ‘Bank or bust’ is more of a game for fun but is highly addictive.

The team is also producing educational resources to help teachers get the most from the Volcanoes Top Trumps cards, tailored to some of the learning outcomes at primary and secondary school.

We wanted to use the card game to highlight how much we know about volcanoes, and this online version will help teach many more people about the hazards that different volcanoes often pose in a fun way. 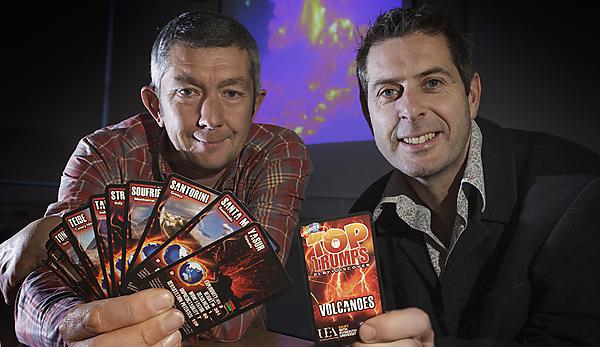 “The opportunity to partner with these historic institutions to develop a Volcanoes pack based upon their expert knowledge was too good to pass up. As the World’s No.1 educational card game, it’s important to make our packs accessible to all, and the creation of an online version gives that access to students and volcano enthusiasts of all ages a fun learning experience. The game engine has been designed specifically to be engaging, and most importantly allow friends to compete against each other to find out who is really Top Trumps!”

Professor David Pyle, from the University of Oxford and Oxford Sparks, said:

“We hope that the online game will be an exciting way to bring volcanoes into the classroom, and have added a number of activities and other resources for educators on the Volcanoes Top Trumps website. We will be very glad to hear feedback on these, and suggestions for new activities to develop and share.”

“The volcanic world is constantly evolving, and its unpredictability is potentially its most dangerous element. I’m excited that we’ve found this new educational vehicle, so can communicate the potential hazards to a wider audience so the global community is both engaged and prepared. Volcanoes are amazing though – I think in the end my favourite category we came up with is Wow! Factor.”