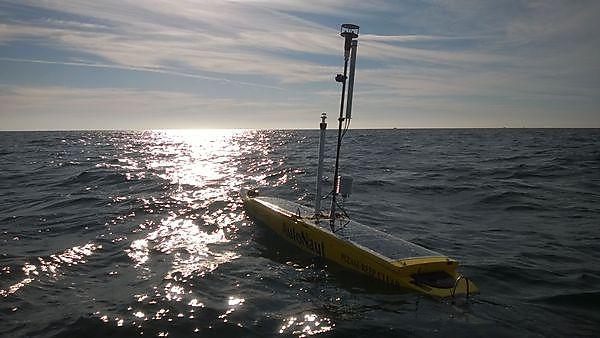 Researchers and students at Plymouth University will have the chance to use an advanced autonomous wave propelled surface vessel thanks to a new deal signed with a leading UK designer.

MOST (Autonomous Vessels) Ltd, based in West Sussex and Devon, are to provide one of their AutoNaut® craft after entering into a licence agreement with the University, through its Marine Institute.

The licence includes access to a 3.5-metre pre-production model, designed to be sent out unmanned into the marine environment and used to conduct research.

“This is a great opportunity for the University to partner with an innovative company at the cutting edge of marine robotics and use of autonomous vehicles in ocean science,” said Professor Martin Attrill, Director of the Marine Institute. “And we think that this arrangement with MOST (AV) can be very beneficial for staff and students, as it puts at their disposal technology that they would not otherwise have the chance to use.”

AutoNaut comprises a single hull with four moving hydrofoils, which harness wave energy as it pitches and rolls in the water. It has photovoltaic panels on the deck to harvest solar energy, and may carry a methanol fuel cell for additional electrical power for sensors and communications. AutoNaut can operate either autonomously or be guided by a pilot using a laptop and internet and satellite communication, and it can stay at sea for multiple months, and can carry sensors mounted on a mast, inside or through-the-hull, and towed behind.

Training students in the use of autonomous technology is a fundamental part of the new agreement.

“Last year, MOST (AV) trained four of our students to pilot these vessels as part of their first commercial operation,” said Dr Alex Nimmo Smith, Associate Professor of Marine Physics, in the School of Marine Science and Engineering. “Now we want to develop this concept with MOST (AV) so that our researchers and students have a chance to operate autonomous vehicles that are at the leading edge of marine science, and in doing so develop skills that they will be able to take into their future careers.”

AutoNaut has undergone more than 100 sea trials off Plymouth, and survived storm Force 10 winds and seven-metre waves in the Atlantic Ocean while towing a 25-metre acoustic array. In the event that it capsizes, the craft will simply right itself and carry on.

“It has turned out to be a superb surveillance platform, and by far the most seamanlike solution for this kind of unmanned research vessel,” said Mike Poole, Director of MOST (AV). “Every week brings new uses for it, in the oil and gas and renewable energy sectors, as well as military and science applications. We’re delighted to be working with the University, training the next generation of marine professional in the use of autonomous technology.”