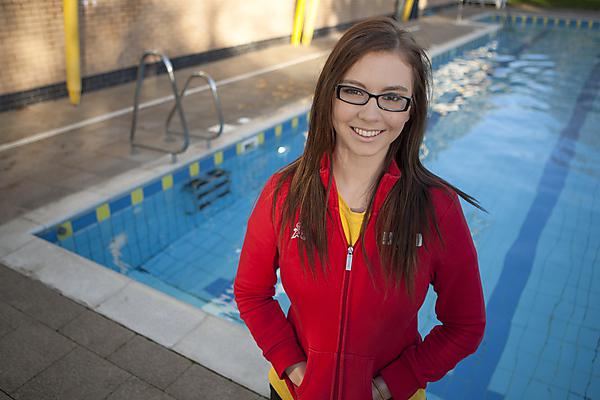 Lauren Bullard, who has been involved with EarlyBird since she was four years old

A unique study which has followed 300 young people from age five since 2000, has received backing for a third phase which will see it become the first study of its kind in the world to track the same group from childhood to adulthood.

EarlyBird3 as it will be called, is the latest development in the ground breaking EarlyBird project. Established in 2000 the study has weighed, measured and investigated children in the Plymouth (UK) area to see how their lifestyles, diet and exercise patterns affect health – especially diabetes.

The project is the only one of its kind in the world to have followed the same cohort of children for such a long period, and as a consequence the data it has accumulated has been used by researchers to make a number of vital discoveries about the relationship between lifestyle and health.

Such discoveries have linked lifestyle and/or genetics to ‘western’ conditions such as diabetes, obesity, heart disease and stroke. Recently the data allowed researchers to show a link between childhood obesity and the early onset of puberty.

EarlyBird3 will follow the original cohort of youngsters into early adulthood. The study aims to test whether patterns of pancreatic function detected in childhood persist into adulthood and may be responsible not only for adult health conditions, but also for the shape and fat content of the body.

It will also explore the childhood origins of a broad range of health problems: not just the health issues addressed by EarlyBird in previous years, but also in new areas such as dental, psychological and respiratory health.

EarlyBird3 will run from the end of 2014 until 2017. At that point the research team will complete their analysis of their findings and publish them.

The study organisers are re-recruiting members of the original cohort. Two young adults who have had a long association with EarlyBird are pleased to be asked to take part again.

Lauren Bullard, 19, from Plymouth, started on the EarlyBird project when she was four years old. Lauren is currently on an Education Studies course at the University of St. Mark & St. John.

“I loved doing this as a child – it was something different that not everyone was doing. We would have two appointments a year: the first was a big one with lots of tests and the second was a check-up. I’m delighted to be taking part again. It’s a really good idea and something which needs to carry on.”

Sean Bowden, also 19, from Plympton, is currently training as an apprentice PE teacher at Tor Bridge Primary School. Sean was five years old when he first started on the EarlyBird project.

“We would have all sorts of tests, and they would see how active we were – we had to wear a ‘busy box’ over a certain period of time which measured our activity. I’m ecstatic to be asked to take part again. As I’ve got older I understand more what it is all about, and it is especially important to me because my auntie died of diabetes last year. I strongly believe in EarlyBird.”

The project is led by Plymouth University in association with Plymouth Hospitals NHS Trust and the Clinical Research Network: South West Peninsula, which is part of the National Institute for Health Research, with active participation and support from Nestlé Institute of Health Sciences Ltd.

The EarlyBird3 team is led by Professor Jonathan Pinkney, Professor of Endocrinology and Diabetes at Plymouth University Peninsula Schools of Medicine and Dentistry. He said:

“The data we extract from EarlyBird3 will allow us to investigate a number of hypotheses about how what happens to us as a child relates to our health as an adult. Not only will this give us a better understanding of how such diseases develop, it will also help us to identify methods for disease prevention, and when in our life development it is best to implement those. The fact that ours is the only study of its kind to follow the same people from childhood into adulthood means that our data will be of immense value to researchers around the world – crucial given the impact of ‘western’ lifestyle and diet on health in all areas of the globe, and the pressure those health issues place on care systems.”