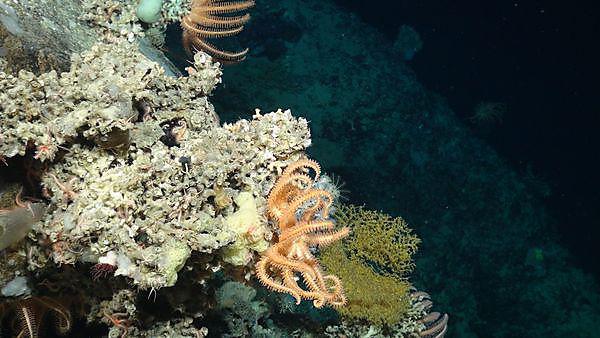 Beautiful coral, predatory monkfish and an array of crustaceans are among the many species captured in high definition video living on four seamounts in the North East Atlantic Ocean, between 200 and 450 kilometres west of Scotland.

The pictures have emerged from the pioneering Deep Links project, led by Plymouth University Marine Institute, as part of a joint project with the University of Oxford, the JNCC and British Geological Survey, which will investigate how patterns of population connectivity vary with depth in the deep-sea, and how this influences species diversity. They were taken by one of the most advanced robot vehicles in the world, the Isis remotely operated vehicle (ROV), deployed from RSS James Cook during a six-week research cruise funded by the Natural Environment Research Council (NERC).

Dr Kerry Howell, of the School of Marine Science and Engineering at Plymouth, and a renowned expert in mapping deep sea environments using underwater video technology, is the project lead. Dr Howell said:

“Exploring the deep sea is like exploring space, it is extremely difficult and limited by technology. The Isis ROV has allowed us unprecedented access to this unique and wonderful part of the UK’s marine area. The pictures and video bought back reveal a stunningly biodiverse environment, with many species observed likely new to science. While the samples we have been able to collect with this robot are of outstanding quality. We will spend the next two years analysing all the data seeking to understand the inter-relation of these species at different locations.”

In one of the clips, taken more than one kilometre below sea level, a stunning two-metre high deep-water coral can be seen swaying in the currents and covered in crabs and other crustaceans. In another, a monkfish is sitting on the seabed angling for prey with the lures on its head.

This window into the underwater world has only been made possible by advancements in both robotic technology and the dawn of high definition video. The project not only made use of the Isis ROV but also deployed Autosub 6000, an autonomous underwater robot, to map areas of the seamounts in very high resolution. The robots were sent down repeatedly at four sites in the Atlantic during the 40 day expedition, which is due to finish later this month.

Prof Alex Rogers, at the University of Oxford, is leading work investigating the relatedness of the animals on the different mountains using a type of genetic fingerprinting. He said:

“Our work on understanding the connectivity of populations of these amazing animals will be critical in understanding how to design networks of marine protected areas on the UK continental margin. Some of these animals generate habitat for many other species and are highly vulnerable to human impacts such as bottom trawling. Spatial protection measures are the most effective way to conserve them.”

Neil Golding, from JNCC, the public body that advises the UK Government and devolved administrations on UK-wide and international nature conservation, and a partner of the project, added:

“This project has completed some immensely valuable research, with the results being crucial to developing our knowledge of how deep-sea communities are connected as well as helping us understand the contribution to the MPA network.”

About the Deep Links project

Read about the story on the national BBC website