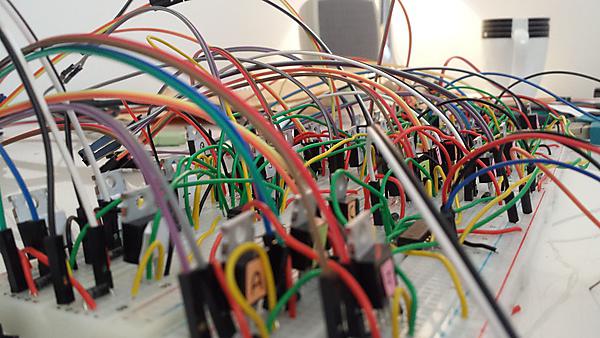 An antique typewriter has been transformed for the digital generation, using sensors and circuit boards to turn it into an interactive social tool.

Joe Hounsham, a graduate of the BA (Hons) Digital Art and Technology programme at Plymouth University, decided to revive the 1930s instrument after a presentation about smarter technologies which also invited students to breathe new life into defunct technology.

The result is an interactive piece, titled Dico, which enables people to use the typewriter as a means to communicate through internet forums.

But Joe believes its uses are potentially limitless, such as turning on lights by typing certain keywords, typing out the daily news headlines each morning or creating a retro digital guestbook.

Joe’s vision has captured the imagination of those who have seen the piece, and it has now earned him a Smarter Planet Award from global technology giant IBM, who have been working with the University since 2011 to deliver a module on the Digital Art and Technology course.

“I was in the University’s Writing Café and they had an old typewriter which didn’t work. I have always really enjoyed taking old technology and giving it new purpose, and suddenly thought it would be great to create a functioning typewriter with a technological twist. It was incredibly challenging to build the hardware, and I had to contact a supplier in Germany to get precisely what I needed, but people had great fun with it and seemed to love the novelty of having a conversation with someone by typewriter.”

During his course, Joe’s other projects included transforming a 1950s short wave radio which feeds off a person’s brain activity to create small poems.

I have always really enjoyed taking old technology and giving it new purpose, and suddenly thought it would be great to create a functioning typewriter with a technological twist

For Dico, he used an ultrasound sensor to detect when a person was approaching it, and then creates a connection to a random person using an internet chat service.

Messages received from that person are then transmitted through micro-controllers to solenoids, which pull down on the typewriter keys and type the message out on paper.

Occasionally, the system will randomly encrypt a message – requiring a booklet to decrypt it – as Joe said he also wanted the piece to pose questions about online security.

It was a big hit with visitors to the HOT’14 Faculty of Arts degree show at the University in June, but Joe is already looking at ways to improve it going forward.

“I'd like to refine it further, perhaps build another and have them talking to each other all day long. And I'd love to continue working in this innovative field of technology, not necessarily building antique projects but working on ways to use technology to creative amazing things that will change the world.”

"It is really amazing what the students on the Digital Art and Technology course at Plymouth University are creating. The projects are fun and imaginative but they are being built on technology that is highly relevant to industry, and students are developing some great skills at the same time. There is something emotive about Joe's project – people are compelled to find out how it works – and I am really looking forward to working with the next group of students over the coming months.”

Courses and Study at Plymouth University