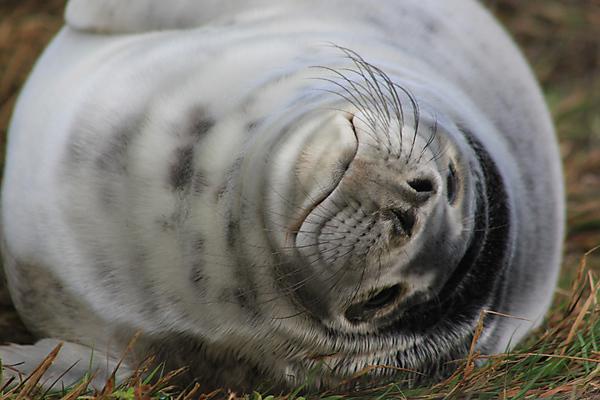 Male and female grey seal pups show distinct behavioural differences as they learn to forage in the early stages of their independence, according to new research which scientists believe could be crucial to the future protection of their habitat.

The pups are abandoned by their mothers when they are just three weeks old, with many of them never having ventured into the sea, let alone sourced their own food.

In a critical period lasting around 40 days after going to sea, pups have to find regular sources of food and perfect their diving and prey-catching techniques before their energy stores run out.

Using data from tracking devices, scientists showed that female pups from Welsh colonies were more likely to dive in shallower water than their male counterparts, reaching the seabed more frequently and likely having greater feeding opportunities as a result.

Although adult male grey seals are much larger than females, there is no significant difference in body size at this age and scientists think the differences in behaviour of pups may be driven by underlying physiological processes that prepare them for adult life.

The study also presented data of young seals from Scotland, showing them heading across the North Sea as far as Norway, while individuals from West Wales travelled as far as the northern coast of France. Some of the seals remained at sea without retuning to land for up to two months during this early developmental phase.

Scientists believe the insights it provides into the initial foraging behaviour of grey seal pups around the UK could be important for the development of future protection of key habitat for these animals when they are at their most vulnerable.

Matt Carter, a PhD student within the Marine Vertebrate Research Group at the University of Plymouth, led the research. He said:

“Grey seals are a top predator in UK seas, but we know very little about the early-life behaviour of young pups at sea. In the first three weeks of their lives, whilst suckling on land, they can treble in mass, but they are then abandoned and have to fend for themselves. This study fills in some of the blanks with regards to what happens when they go to sea, and will help us to understand more about the types of habitat that are important for their development.”

The UK is home to around 40 per cent of the world grey seal population and has an obligation under European Union legislation to maintain them in favourable conservation status. As part of that, critical habitats must be identified both on land and at sea where disturbance caused by human activity is minimised.

This study used data from 52 recently-weaned grey seal pups from colonies in Scotland and Wales, tagged by the Sea Mammal Research Unit. The tracking devices recorded their movements including dive duration and depth as well as location data.

The results show that in the first 40 days after leaving the colony, the pups show a fast rate of behavioural development, which includes increasing their dive performance and learning where best to source food.

“This initial stage is when the pups are at their most vulnerable and juvenile survival is important to sustain stable populations. Seals are facing increasing threats, such as fisheries bycatch and increasing noise from shipping and construction activities, which we are continuing to explore as part of our wider research.”

“This study adds to what we know about increasing dive performance in seal pups as they first learn how to find and catch fish. It’s exciting to see such differences between regions, and in the behaviour of males and females, which might set up their feeding strategies later in life.”

The full study – Intrinsic and extrinsic factors drive ontogeny of early-life at sea behaviour in a marine top predator by Carter, Russell, Embling, Blight, Thompson, Hosegood and Bennett – will be published in Scientific Reports, doi: 10.1038/s41598-017-15859-8.

The University and our partners are studying seal pups during their first months of independent life to discover how they learn to forage, and develop habitat preference.

Watch our video to find out more.