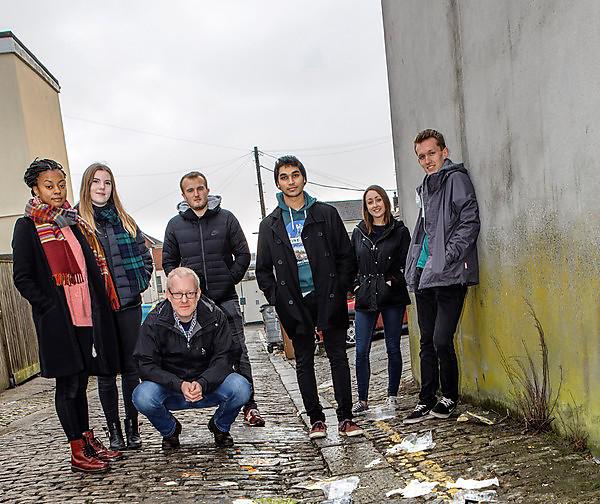 Teams of students from the University of Plymouth will take to the city’s streets on Sunday 5 March after signing up to the Keep Britain Tidy Great British Spring Clean.

Members of the Geography and Environmental societies are currently looking for volunteers to help them rid streets close to the city centre of litter in an attempt to make their community a better place for everyone to live and visit.

Their clean-up is being supported by leading academics across both subjects, and the community including Great Western Railway, and is among hundreds of events taking place as part of the national initiative.

The students’ project builds on a clean-up organised by Lecturer in Environmental Science, Dr Louise Firth, in November last year and it is hoped it could become a regular event in the student calendar.

It complements Plymouth’s position as an award-winning green university, and reinforces the student body’s national reputation for being both environmentally and socially responsible.

Kannee Hamilton, chair of the Environmental Society at the University, explained why she felt it was important to get involved in the project. She said:

“Once you leave home and move to study somewhere new, the university and surrounding city become your home. Litter can not only harm marine and terrestrial environments but also affect a person’s mental wellbeing. The amount of litter and waste on our streets is of great concern to me because I want to be proud of the place I have called home for the past three years.”

“Plymouth is by no means unique in having litter on its streets. But wherever you see it, it makes a lasting impression on visitors, and has a negative impact on those living amongst it every day. We live in a beautiful city with thousands of people who care about its appearance, so this excellent initiative by our students has a number of obvious benefits.”

On Sunday 5 March, the students and any other willing volunteers will meet at Plymouth Railway Station at 11am and then spread out around the local area to begin their tidy up. Collected litter will then be brought back to the station to be disposed of.

“We are delighted to support the university students in their Great British Spring Clean initiative. We recognise the value rail has in supporting the communities we serve, the local and national economy; and it is important that those coming to Plymouth see what a clean, tidy and vibrant Ocean City it is. Looking to the future, we are currently working on plans with Plymouth City Council and Network Rail for a major redevelopment of the station, and a new gateway to the city.”

The students will also be joined by Oliver Colvile, MP for Plymouth, Sutton and Devonport. He said:

"It is really important that we live in a clean environment and I am delighted to take part in this Keep Britain Tidy campaign."

The Great British Spring Clean is being backed by charities such as the RSPCA and the Marine Conservation Society, central Government and organisations including Highways England and businesses including McDonald’s, Greggs, Lidl, Costa, Wrigleys and Coca Cola.

"It's so important that students work with their local community to make where they live, where they grow up and where they study, just their environment that little bit cleaner"