A University of Plymouth student is making the final preparations before setting sail on an environmental voyage around the coast of Great Britain.

Megan Ross, who is about to start her final year of a BSc (Hons) Marine Biology degree, will be part of the crew for the first leg of the eXXpedition voyage (sailing from Plymouth to the Isle of Arran).

The voyage, setting off from the University’s Marine Station on Tuesday 08 August, will incorporate high-profile events in Plymouth, Cardiff, Belfast, Arran, Stornaway, Edinburgh and London.

Megan, 21, has always had an interest in marine biology but says it wasn’t until she came to the University that she realised the full scale of the subject. She said:

“I grew up watching David Attenborough programmes and was fascinated by dolphins. And I’ve always lived by the coast so the combination of sea and science really appealed to me when choosing to come to Plymouth. But since I’ve been here, I’ve become interested in all aspects of marine biology and taken every opportunity to experience it and expand my knowledge.”

Megan has spent the past year on a variety of placements, included volunteering at a seal sanctuary in Cornwall and working as a beach ranger in Polzeath, on the North Cornwall coast.

It was during the latter that she started to appreciate the scale of the global marine litter problem, and began to research its causes and effects.

She also began talking at length with Professor Richard Thompson, Head of the University’s International Marine Litter Research Unit and an internationally renowned researcher in the field.

After becoming aware of the eXXpedition voyage around the UK, she saw it as the perfect opportunity to increase her knowledge of the issue and apply her own skills.

"Plymouth is very good for field work opportunities, so I know how to use the equipment and research techniques," Megan said. "The sailing is something I currently have limited experience of, but I’ve always wanted to try it and I’m really looking forward to it. I see this trip as an opportunity to gauge current public perception of the marine litter problem and raise awareness. But I also see it as an opportunity to broaden my own skills as I move into my final year and begin to work on my dissertation."

eXXpedition specialises in all-women sailing trips with a focus on highlighting the devastating impact single-use plastic is having on our planet’s oceans, ecosystems and on human health. It has run previous expeditions all over the world, and previous research has highlighted the endemic nature of microplastics within our ocean environments globally and the increasing potential impact they have on human health.

This summer will be the first time they will have a crew sampling in UK waters, and they will be sailing on board the 72ft challenge yacht Sea Dragon (owned by Pangaea Exploration). They will leave the Marine Station on 8 August, completing their sail on 5 September.

We may be seeing the more obvious impact of plastic and toxic pollution in the more remote parts of our planet, but what is clear is that the pollution is coming from land – the UK included.

Find out more about eXXpedition Round Britain 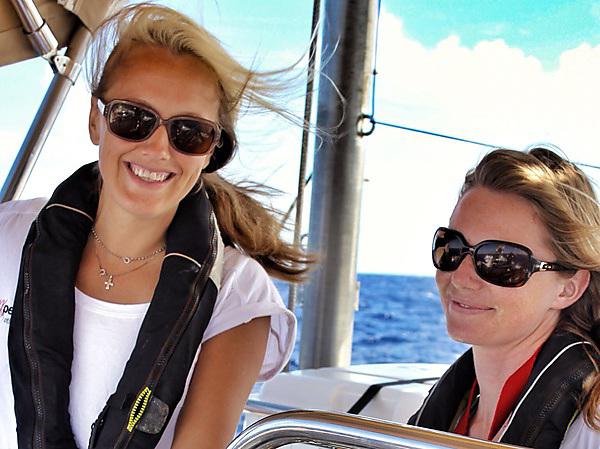